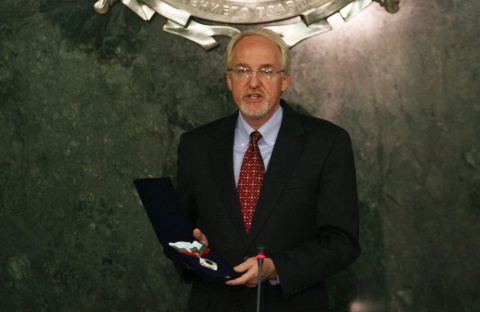 Diplomatic cable of the US embassy in Sofia, dated December 9, 2005, has been revealed on WikiLeaks and provided to the project for investigative journalism www.bivol.bg, bringing out new details about the way Bulgaria's far-right, nationalist Ataka party and its leader, Volen Siderov, are viewed by former American Ambasador, John Beyrle.

1. (SBU) SUMMARY: The rhetoric of the extreme nationalist party Ataka has become increasingly anti-American in recent weeks, with much of the party's wrath focused on proposed joint military facilities and Bulgaria's participation in the Iraq coalition. Neither high-profile infighting in Ataka's parliamentary group nor persistent speculation about its imminent split have eroded support for the party, which won nearly nine percent of the vote last June within weeks of its founding. The recently-launched "Ataka" daily provides a larger platform for its extremist views. Its slick format, professional editing and provocative anti-American headlines have caused circulation to surge to the level of some of the smaller mainstream dailies, but have also raised questions about the sources of Ataka's funding. The party maintains close public links with the Russian embassy. Although Ataka's noisy nationalism has not had significant political impact to date, its hardline stance on issues such as Bulgaria's presence in Iraq and joint military bases puts pressure on the Socialist, whose core electorate often shares similar views on foreign policy.
END SUMMARY

2. (U) Ataka, which rose to prominence on the eve of the June general elections, campaigned under the slogan "Let's Give Bulgaria back to Bulgarians." It won the backing of 300,000 people in what was widely perceived as a protest vote, becoming the fourth-largest party in parliament and the largest opposition group (Ref. A, B). But less then a month after its surprise entry into politics Ataka was hit by infighting and defections, which eroded the number of its MPs from 21 to 17. Wrangling among Ataka founders spilled into the local media as MPs rebelled against the autocratic behavior of their leader, Volen Siderov (Ref. B), and accused him of pocketing a state subsidy of 50,000 levs
(,300).

3. (U) As early as August, two of the main groups within Ataka -- the "Union of Patriotic Forces and Reserve Officers" and leftist "Zora Political Circle" (Ref. B) - openly distanced themselves from Ataka, saying Siderov's xenophobic and overtly racist views distorted the party's "true patriotic values." The young activists from the ultra nationalist Bulgarian National Union (BNU), which formed the core of Ataka's noisy rallies, have also been unhappy lately with Ataka, though for quite a different reason. They say Siderov has become part of the political status quo and has "privatized" the party.

4. (SBU) Ataka is undoubtedly the loudest group in parliament, but its initiatives have failed to gain legislative traction. Its proposals for immediate withdrawal of Bulgaria's contingent from Iraq and a ban on state-television broadcasts of Turkish-language news were rejected by overwhelming majorities. MPs also declined to debate Siderov's proposal for a resolution against "the U.S. Ambassador's unacceptable interference in Bulgaria's domestic affairs." Ataka's proposal for a parliamentary declaration against a U.S. military presence in Bulgaria was voted down by MPs as well. Furthermore, Siderov's rabid outbursts in parliament -- in which, for example, he referred to other MPs as "squealing pigs" and called President Georgi Purvanov "a miserable traitor" -- have caused some of his own MPs to distance themselves from their leader As recently as December 7, Siderov was expelled from the plenary hall for asserting in a derogatory manner that one of the deputy speakers of parliament (former Prime Minister and Ambassador to the U.S., Philip Dimitrov) was homosexual and a U.S. agent.

5. (U) Speculation about Ataka's imminent demise are, unfortunately, premature. Neither scandals within its group nor its futile actions in parliament have eroded its core support. Opinion polls show support for Ataka has remained stable over the past several months, and some recent polls rank Ataka as the country's third-largest political force, ahead of the predominantly ethnic Turkish Movement for Rights and Freedoms (MRF) and all three parties on the fragmented center-right. A poll by the National Center for Public Opinion Research from late November showed that if general elections were held now, 24.4 percent of all voters would support the ruling Socialists, 8.2 percent would vote for ex-PM Simeon Saxe-Coburg's National Movement for Simeon II and 7.4 percent would back Ataka.

6. (SBU) Some 43 percent of those polled said they would not vote--not surprisingly, since the last elections were in June. A November survey by the reputable Alpha Research agency put support for Ataka at 6.5 percent, closely following the MRF's 6.7 percent. The party continues to draw support from people discontented with the mainstream parties and from those who have suffered from the post-communist transition to a market economy. It successfully exploits negative feelings among ethnic Bulgarians toward the Roma minority and growing discontent with the political influence of the ethnic Turkish MRF, which is widely
perceived as corrupt. Ataka's electorate also includes leftist hardliners displeased with BSP's reformist course, as well as disenchanted rightists; it attracts people from
all ages and social strata (Ref. B).

7. (SBU) Ataka gained another platform for its extremist views by launching in mid-October a newspaper with the same name, which serves as the party's mouthpiece. The 20-page
daily, whose editor-in-chief is Siderov's longtime domestic partner, journalist Kapka Georgieva, carries news reports on domestic and international politics, business, the economy, and sports, as well as analytical and investigative articles. Its competitive price, slick format, professional editing, and provocative headlines have caused circulation to surge to the level of some of the smaller mainstream dailies. Siderov uses a daily commentary column to promote his overtly racist and xenophobic views, and constantly reminds his readers of "the mercenaries and lackeys" in the incumbent government who have "willingly surrendered the country's sovereignty to serve the West."

8. (SBU) The rabidly anti- American Siderov has not missed an opportunity to blame the U.S. and its allies for the plight of Bulgarians "who are victims of a Western conspiracy against their small Slav Orthodox nation." He is currently using the pages of "Ataka" daily for a campaign against joint military bases in Bulgaria, collecting signatures for holding a referendum on the issue. "U.S. spy Robert Loftis, who is getting more and more impudent, requested the establishment of U.S. bases without paying a penny for them," Siderov wrote in a recent commentary. He warned that the shared bases would turn the country into a terrorist target and might be used as U.S. nuclear bases. "The Americans will be allowed to pollute the bases like a bunch of pigs and transform them into drug trafficking centers," Siderov concluded. On December 8, he accused MPs of passing laws, "according to which we . . . follow foreign orders, send troops wherever Washington tells us to, and give all possible bases to the American assassins of children and women."

9. (SBU) A day later, Siderov appeared on the front page of "Ataka" with Russian Ambassador Anatoly Potapov. In an accompanying article headlined "Russia Will React to U.S. Basing," the paper says that Ataka MPs met with Russian embassy leadership at the invitation of Potapov. The meeting was a result of "the Russian mission's interest in the breakthrough of Bulgaria's newest parliamentary party and its leader." Russian diplomats reportedly noted the fact that "Ataka is the only party in Bulgaria's parliament that envisaged new policies with regard to relations with Russia." The proposed U.S. military presence was among the key issues raised by Siderov at the meeting Potapov is quoted as responding that "Bulgaria is free to make independent decisions but, of course, Russia was not happy about the deployment of bases near its territory." The Russian defense attache reportedly went on to say that the U.S. presence "would disturb the balance and violate the agreements on Conventional Forces in Europe and could lead to a revision of these agreements." Ambassador Potapov concluded the meeting by "wishing Ataka a success in its patriotic activity and in protecting the Orthodox religion."

10. (SBU) COMMENT: Six months after the June vote, initial forecasts that Ataka would fade from prominence as quickly as its rose have turned out to be incorrect. Despite all the negative publicity that accompanies Ataka's infighting and defections, the extreme nationalist group continues to enjoy stable support from all age groups and social strata across the political spectrum. Ataka fills an electoral niche for a group that is perceived as an alternative to the mainstream parties, talks in plain language and offers easy solutions to painful economic and social problems. Even if forecasts for Ataka's potential disintegration come true, its electorate will remain in place and could back any hard-line movement that emerges to replace it. In the meantime, questions remain about Ataka's sources of funding, with speculation ranging from organized crime groups to former members of the communist-era security services to third countries. The ruling Socialists, for their part, are reluctant to confront Ataka directly because the party's positions on issues such as joint bases and Iraq often reflect the views of the BSP's core electorate of elderly communists. The Embassy maintains a no-contact policy with Siderov and other Ataka representatives, and have encouraged Bulgarian leaders to speak out against the party's xenophobic message. Believing that direct Embassy confrontation with Ataka will amplify their message, we have concentrated on correcting their misinformation andencouraging others to question their financial backers. ENDCOMMENT