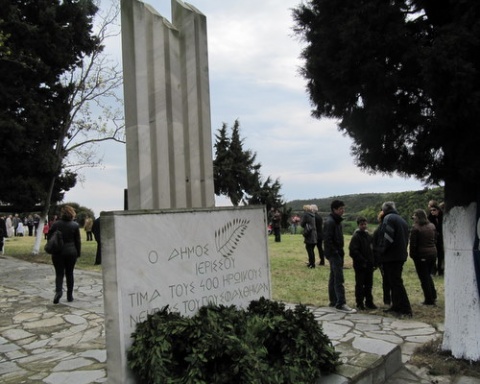 The monument at Mavro Aloni in memory of 400 local residents, slaughtered by Ottoman forces in 1821. Photo by the author

For most Bulgarians northern Greece equals the beautiful beaches of Chalkidiki and the mystery of Mount Athos' monasteries, but very few know about Mavro Aloni (Black Harvest) – a place still bearing the scars of the country's fight for independence from the Ottoman Empire.

In April 1876, Bulgarian freedom fighters rebelled against the authorities of the Ottoman Turkish Empire seeking to liberate their nation and create an independent nation state.

The so called April Uprising was crushed with great violence by Ottoman forces, when an estimated 30 000 Bulgarians, mostly civilians including women, children, and elderly, were slaughtered. Coverage in the European press led to an international outrage and a humanitarian intervention in the Russo-Turkish War of 1877-78.

The massacre in the southern town of Batak, described by journalist MacGahan in a shocking account, has remained in history as a symbol of the atrocities of the Ottoman forces.

However, 55 years ago, almost to the date, in 1821, the Orthodox Metropolitan Germanos of Patras proclaimed the Greek national uprising. Simultaneous risings were planned across Greece, including in Macedonia, Crete and Cyprus. With the initial advantage of surprise, the rebels succeeded in liberating Peloponnese and some other areas. The Ottomans soon recovered, and retaliated with great savagery, provoking sympathy for the Greeks in western Europe, particularly fueled by the tragic death of the poet and leading philhellene Lord Byron at Missolonghi in 1824.

Western powers intervened and in May 11, 1832 Greece was finally recognized as a sovereign state.

Today, the custom of "Mavro Aloni" keeps the memory of the fight and the massacres alive. The commemoration is about to begin. Photo by the author

The place is perched on a beautiful hill with a gorgeous view of the sea. In any other day, only the monument reminds of the drama that took place there in 1821. But not on the day after Easter Monday, when residents of Ierissos come together to pay homage to the victims. View from the hill. Photo by the author

"Mavro Aloni" is the place where 400 locals were massacred by Ottoman forces on the order of Bey Sindik Giousouf. People from Ierissos tell the story of a cunning promise for general pardon which was made to those who would accept to surrender. 400 believed. Armed Ottomans forced them to dance in a large circle and after each full turn one dancer was slayed with swords. The dance. Photo by the author.

In their honor, every year on Tuesday after Easter, rain or shine, hundreds of local people and visitors hold a mass at Mavro Aloni. They also do a reenactment of the dance called barrier (kangeleftos), a slow, unrehearsed dance (argosyrto) imitating the hesitant steps of those sentenced to death, and sing a commemorative chant. The dance - second person from the left is the Deputy Regional Governor, Giannis Giorgos. Photo by the author

When the song nears its end, the first two from the circle join their hands and stretch their arms to replicate the stretched Turkish swords. All other participants pass under this arch still dancing, chanting, with women and men taking turns, while the swords fall on their heads. End of the dance. Photo by the author

The event ends with the sharing of boiled eggs, colored for Easter as is the Greek Orthodox tradition, of sweet Easter bread, other pastries, coffee and beverages. Food sharing. Photo by the author

One of the most meaningful and beautiful songs of famous Greek performer, Nana Mouskouri, is dedicated to the massacre – titled Mavro Aloni and written by Nikos Gkatsos.

The Mayor of Aristotle, Christos Pahtas, the Deputy Regional Governor, Giannis Giorgos, and many other officials were present at the 2011 ceremony, held on April 26.

Pahtas spoke to our Bulgarian group, and we soon realized he knew plenty about Bulgaria – in his political career he had met on numerous occasions former Communist ruler, Todor Zhivkov, and many Bulgarian politicians and country leaders after the fall of Communism. Pahtes had also been the main rapporteur on Bulgaria at the Council of Europe in 1992, when our country joined it.

"This commemoration is the recreation of real events. We don't seek revenge, but also don't want to forget," Pahtas says. "Remember Greeks, the freedom of classical Greece, the Battles of Marathon and Thermopylae, let us fight for those who died for our freedom. Let us fight for the shadows of Epaminondas and Thrasyboulos, .. of Harmodius and Aristogeiton... for Miltiades, Themistocles, Leonidas who killed a large number of the Barbarian Persians before they died." Alexandros Ypsilantis, leader of the Filiki Eteria, a secret organization that coordinated the beginning of the Greek War of Independence against the Ottoman Empire. The commemoration ends with the waving of the Greek national colors. Photo by the author

Next read about Ammouliani Island, the Monastery of Zigou and Ancient Stageira.