Bulgarian Pursued UK Woman Before Beheading Her in Tenerife 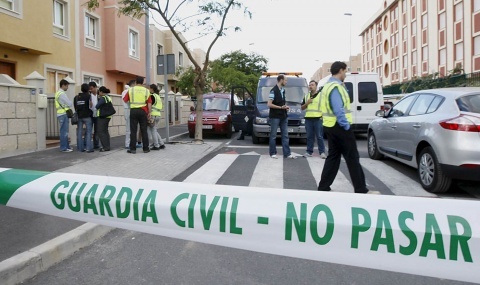 The site where a Bulgarian man in Tenerife attacked and beheaded a woman in public. Photo by EFE

The gruesome act Friday, in which a Bulgarian citizen beheaded a British woman in a shopping center in Tenerife, was not completely random, as the perpetrator had pursued the victim for some time before the act.

Earlier during that day, the 60-year-old lady noticed someone following her and entered a labor office to complain to social workers there about her predicament, looking seriously distressed.

The social workers sent of a guard to inspect the area, upon which the attacker vanished.

Tragically, he encountered his chosen victim again at the store, where the gruesome events of Friday happened.

Police have identified the perpetrator as Deyan Valentinov Deyanov, 28. The person apparently has mental health problems - as well as a record of previous acts of violence.

It seems he was one of the few tramps in Tenerife and many people knew him. Press speculate about the worries authorities might have explaining why they have not done enough to prevent him from doing harm to his fellow residents.