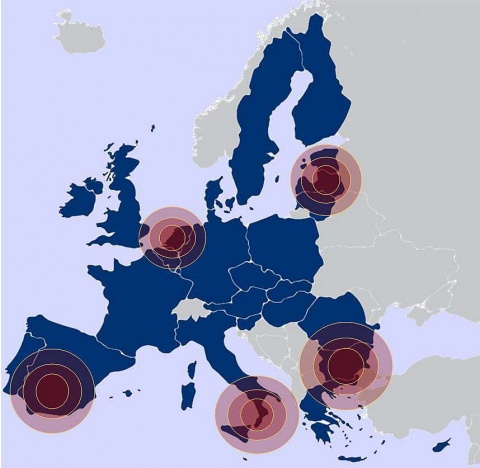 Bulgaria is one of five criminal hubs in the European Union, according to Europol latest report. Photo by Europol

Black Sea ports including Odessa, Constanta and Bulgaria's Varna have been identified as points of transit or entry for cocaine from Latin America, according to the latest report on organized crime by Europol.

According to the report notable modi operandi include concealment in exotic fruit shipments and neutralisation in other materials or solutions, such as coffee, wine, polyester resin and textiles.

The text adds that the control by street gangs of drugs markets in some parts of this region is a concern to authorities, in as much as their affiliation to Latin American gangs may afford them privileged access to cocaine.

"Intelligence indicates that Russian speaking individuals resident in Latin America are facilitating and organising the trafficking of cocaine to the EU and the Russian Federation. EU citizens are also recruited as couriers by Russian criminal groups."

This year's report confirms the prevalence of five criminal hubs in the EU, highlighting the particular impact of the South-East hub and the Western Balkans region.

Of all the hubs the South East has seen the greatest expansion in recent years, as a result of increased trafficking via the Black Sea, proliferation of numerous Balkan routes for illicit commodities to and from the EU, and a significant increase in illegal immigration via Greece.

"Albanian speaking, Turkish and Former Soviet Union criminal groups are seeking to expand their interests in the EU, and may exploit opportunities in the possible accession of Bulgaria and Romania to the Schengen Zone, and recent and prospective EU visa exemptions for Western Balkan states, the Ukraine and Moldova," says the report.

Europol warns that the possible accession of Romania and Bulgaria to the Schengen Zone will greatly widen the Eastern green and blue borders.

"This has the potential to release the pressure on the Turkish-Greek border, and lead to increased targeting of Bulgaria and the Black Sea coast by illegal immigrants and their facilitators," it says.