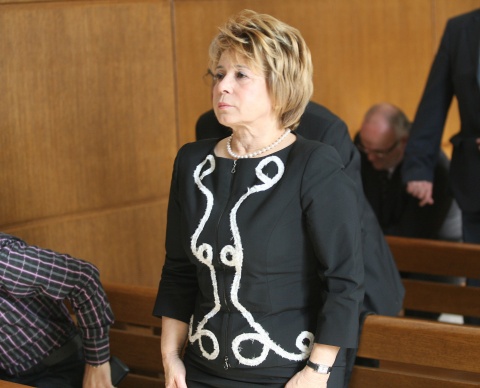 Bulgaria's former Labor Minister Emiliya Maslarova pictured here in court as she is facing charges of embezzling BGN 11 M during her term in 2005-2009. Photo by BGNES

A report of the Bulgarian Audit Office has shown that the Ministry of Labor and Social Affairs has paid enormous sums of money to a number of private Bulgarian media.

According to a report of the Bulgarian edition of Deutsche Welle, the Audit Office document technically proves the informally well-known existence of "state corruption" in the media, which means that state institutions are pouring money in media outlets to get positive coverage and PR.

"The problem of the media in Bulgaria is not that they are subject to government pressure but that they don't mind it," Tatyana Waxberg, a DW journalist, has commented pointing out that the Audit Office report is the first time the corruption in the Bulgarian media was exposed by a state institution.

The audit report of the Labor Ministry found that in 2008 and 2009 the institution paid a total of BGN 603 272 (before the 20% VAT) to at least 16 media outlets in the country. DW stresses that the mainstream Bulgarian media have omitted to make any mention of the Audit Office report. At the same time, the Audit Office report itself does not mention the names of the media that benefited from the state money.

"The media and the government have entered mutually beneficial business relations sealed with a contract. But in this double scandal the media are benefiting considerably more. Tons of research and articles have been written about the corruption in the government sector but there is not a mention of the media corruption. This silence has now been disturbed by an official document," the DW comments emphasizing that the 16 anonymous media outlets served the former Labor and Social Affairs Minister Emiliya Maslarova.

The article argues that the Audit Office must stage a new audit to find out what exactly the Labor Ministry did in 2008 and 2009 since the 16 media in question published only "PR information" about its work.