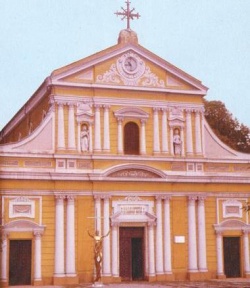 The Sacred Heart Cathedral in the Bulgarian town of Rakovski. Photo by Catholic-Rk.com

Catholics across Bulgaria have gathered Sunday to celebrate the beatification of Pope John Paul II, which was carried out in Rome.

Special festivities were held in the town of Rakovski nearby Plovdiv - home to Bulgaria's largest catholic community.

At noon church bells of the Sacred Heart Cathedral announced the beatification of the beloved Pope.

Believers had the opportunity to see live the solemn mass held at the Vatican.

Many of them had the chance to meet John Paul II in person during his visit to Bulgaria in 2002.

Next Sunday, a special service will be held in Rakovski by the Papal Nuncio for Bulgaria, archbishop Janusz Bolonek, who is a fellow Pole.

Although Bulgaria's Christian population is Eastern Orthodox, the country has an important Catholic community and throughout history has maintained special relations with the Holy See.