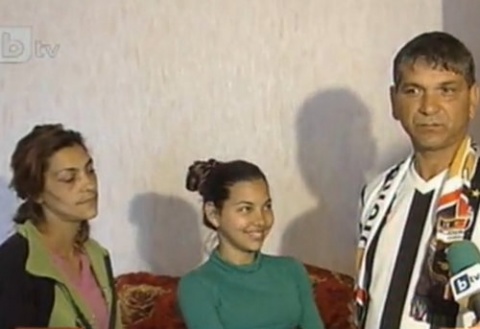 The family of Valcho Atanasov (right) and Zhivka Atanasova (left) with their daughter (middle) who was originally named after Princess Diana since Prince Charles attended their wedding 13 years ago. Snapshot from bTV

A Bulgarian Roma family from the Stolipinovo quarter in Plovdiv sends good wishes to Kate and William for their wedding even though they are deeply offended at the British royal family.

The Bulgarian Roma – the family of Valcho Atanasov and Zhivka Atanasova - have been deeply disappointed with the residents of the Buckingham Palace because – even though Prince Charles, the successor to the British throne, happened to attend their wedding in Plovdiv 13 years ago, the British royal family has not respond to their pleas for financial assistance.

Back in 1998, during a visit in Bulgaria which included Plovdiv, Prince Charles was a special guest at a random Roma wedding – that of the Atanasov family. This led Valcho and Zhivka to name their first child Diana – after Charles's ex wife Princess Diana.

"We were proud that Prince Charles was at our wedding but we expected from him to give us something lasting – like an apartment or a sum of money," recalls Valcho, as cited by bTV, on the day of the royal wedding of Prince William and Kate Middleton.

Zhivka herself says she also hope to get some expensive present from Prince Charles but never got anything.

Subsequently, the Bulgarian Roma family even sent letters to the Buckingham Palace asking for some kind of material support, and including a photo of their young daughter Diana. What they got back from London was only gratitude expressed by the staff of the Buckingham Palace.

Thus, the Roma family got deeply offended and have changed the name of their daughter from Diana to Evgeniya. They no longer live in abject poverty as in the first years after their wedding since both Valcho and his wife are employed. The husband admits that he works as the driver of an illegal taxi.

In spite of feeling insulted at the British royal family for not supporting them, the family from Stolipinovo, which is the largest Roma quarter in Bulgaria, are excited about the royal wedding of Prince William and Kate Middleton, and wished them much good health, happiness, and love.