Bulgarian PM in Croatia: We Are Much Better Than You! 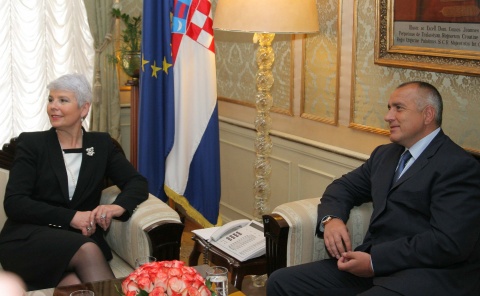 Bulgaria is much better-off than Croatia, according to its Prime Minister, Boyko Borisov, who is on a visit to the Western Balkan country.

"Bulgaria is a very nice place to live. Our debts and deficit are among EU's lowest and we are far ahead of you," Borisov declared in Zagreb, as cited by the Dnevnik daily.

" I am convinced that the European Commission's monitoring mechanism will be removed for Bulgaria in two years, because we will cover the criteria set before our EU accession," Borisov also declared after he met with his Croatian counterpart, Jadranka Kosor.

As far the introduction of direct Sofia-Zagreb flights, it is complicated, Borisov said, as the Bulgarian air carrier is private.

Bulgaria will be among the first states to ratify Croatia's EU accession, the Bulgarian PM also said, stating the negotiation process may end in June.

Borisov's visit comes at the invitation of Kosor who herself visited Bulgaria in April last year. The Bulgarian delegation includes Minister of Economy and Energy Traicho Traikov and Minister of Culture Vezhdi Rashidov.

A cultural co-operation agreement until 2013 is to be signed during Borisov's stay in Croatia. Additionally, the visit will see the opening of a Bulgarian-Croatian business forum as well as a seating of the joint commission on tourism.