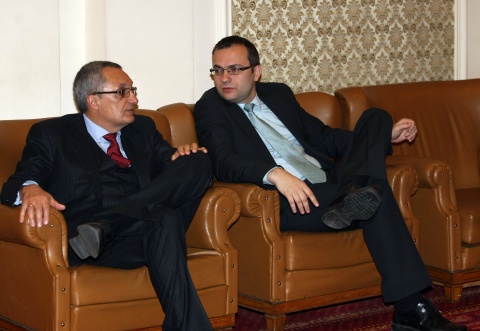 The Union of Democratic Forces and Democrats for Strong Bulgaria, the two parties composing the Bulgarian rightist Blue Coalition, could not come up with a common presidential candidate.

This means the joint candidature will be chosen in a preliminary election on May 15.

On Tuesday, after a secret vote, the Union of Democratic Forces named their vice-chair Rumen Hristov as their presidential candidate for elections in the fall.

Hristov was then proposed as joint candidate to the other Blue partner, but the Democrats prefer their own figure, it was made clear Wednesday, according to Darik radio. Their leader, former PM (1997-2001), Ivan Kostov, was reluctant to comment their partners' nomination.

Kostov said Svetoslav Malinov, one of his MPs, would be a possible nominee from his party.

Meanwhile, Martin Dimitrov, leader of the Union of Democratic Forces, said that he is disappointed with the reaction of Nadezhda Neynski after Tuesday's vote. Neynsky, a former Minister of Foreign Affairs of Bulgaria, was Hristov's opponent. She claimed the decision had been taken in advance and said she would have been the better candidate, .