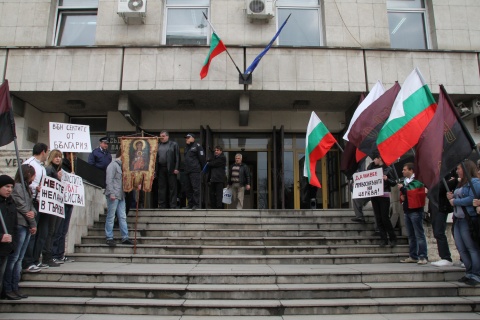 VMRO members seen protesting in the Northern Bulgarian city of Veliko Tarnovo after a local paper published an article posing questions about the sect’s properties. Photo by BGNES

New protests against the Bulgarian Jehovah Witnesses movement are to take place in May, the VMRO – BND nationalist party announced Tuesday.

The rallies will be staged before prayer houses in the Southern Bulgarian cities of Sofia, Plovdiv and Asenovgrad, Alexander Sidi, representative for the party, told Darik radio.

The Jehovah Witnesses is the most aggressive sect when it comes to recruiting new members, Sidi claimed, pointing out they go around knocking on people's doors and that they use their own magazine, " The Watchtower", to lure citizens into their movement.

The attackers were football hooligans, VMRO explained afterwards, stating that the party intended to stage a peaceful protest. However, it warned that accidents like this may follow if the Jehovah Witnesses are not banned.