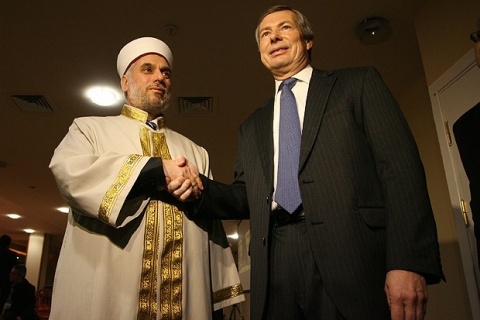 Mustafa Hadzhi shakes hands with US Ambassador to Sofia, James Warlick, after being reelected as Bulgaria's Chief Mufti in February. Photo by Sofia Photo Agеncy

The Sofia Appellate Court ruled Thursday that Mustafa Hadzhi as the legitimate Chief Mufti of the Bulgarian Muslim community.

The rule came after a long court battle between Hadzhi and the other person claiming the post, Nedim Gendzhev.

The appellate magistrates revoked the decision of the lower instance – the Sofia City Court, proclaiming Genzhev as the leader of the Supreme Muslim Religious Council.

The rule is final and cannot be appealed.

The battle between the two has been going on for years. Hadzhi has been elected Chief Mufti by several national Muslim conferences, but the vote had been challenged and overturned in court.

Since the spring of 2010, Muslims across the country have organized mass protest rallies against the court ruling to restore Nedim Gendzhev as Chief Mufti. Gendzhev held the office in the past, but protesters accuse him of various violations, including embezzlement.

The last conference, in February, 2011, elected Hadzhi once again, but those close to Gendzhev, held a parallel one and declared the first illegitimate.