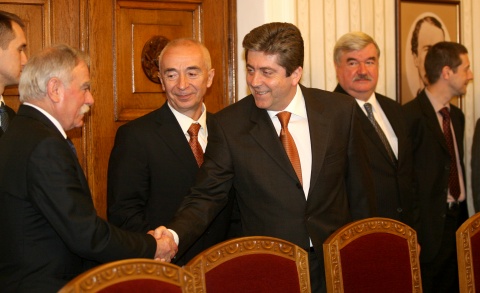 Bulgaria's President Georgi Parvanov has welcomed a delegation of Bulgarian and Russian cosmonauts stressing the possibilities for bilateral space cooperation.

The meeting was in connection with the 50th anniversary of first manned space flight – that of Yuri Gagarin – on April 12, 1961.

Earlier on Wednesday, the same delegation - consisting of Russian cosmonauts Viktor Savinih and Yuri Gizdenko, Bulgarian cosmonauts Georgi Ivanov, Alexander Alexandfrov and Krasimir Stoyanov, Petar Getsov, head of the Bulgarian Academy of Sciences' Space Research Institute, as well as Russian Ambassador to Bulgaria, Yuriy Isakov, and the Chair of the Federation for Friendship with the Peoples of Russia, Prof. Zahari Zahariev – was welcomed by Bulgarian Prime Minister Boyko Borisov and Parliament Speaker Tsetska Tsacheva, with the government promising to take measures to join the European Space Agency.

Prof. Zahari Zahariev and Russian cosmonaut Viktor Savinih thanked Bulgarian President Parvanov for his patronage of the celebrations of the 50th year since Gagarin's flight.

"The celebration of the 50th year since sending the first man in space is great occasion on which to discuss the present situation and the future of space research in Bulgaria. The Bulgarians have the self-confidence of being able to develop as a space nation," President Georgi Parvanov said.

He welcomed the possibilities for cooperation between Bulgaria and Russia in space research, which can lead to sending a third Bulgarian cosmonaut in space.

So far, two Bulgarian cosmonauts, Georgi Ivanov in 1979 and Alexander Alexandrov in 1988, have entered space, both on Soviet Union flights. Earlier this week, Bulgaria's first cosmonaut Gen. Georgi Ivanov, at a special press conference, has urged the government to take steps to reinvigorate and develop the Bulgarian space program.

Back in 2010, on several occasions, US Ambassador to Bulgaria James Warlick mentioned the possibility that a Bulgarian astronaut could potentially fly on a NASA mission.