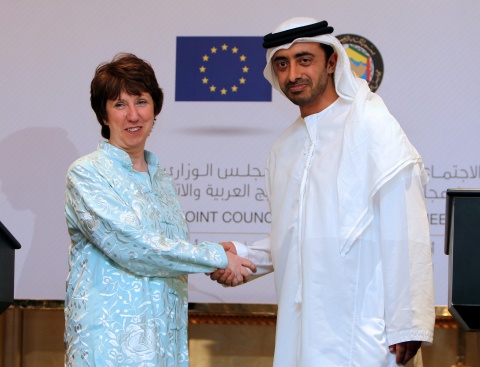 Bulgaria's top diplomat Nikolay Mladenov has urged more invigorated dialogue between the EU and the countries from the Persian Gulf.

The Bulgarian Foreign Minister took part in the 21st session of the Joint Meeting of the foreign ministers of the EU and the Gulf Cooperation Council (GCC) in Abu Dhabi Wednesday.

"The dialogue between the EU and the Persian Gulf states needs serious structuring in cooperation areas in order to be more efficient. The partnership between the EU and GCC is of strategic importance," Mladenov said as cited by the Foreign Ministry press service.

As part of the forum, he had bilateral meetings with his counterparts from Kuwait, Qatar, and the UAE, among others, focusing on topics related to investments and economic ties.

Gulf Cooperation Council officials, as cited by the WSJ, said the EU needs to step up efforts to conclude a long-planned free trade agreement between the two economic blocs, after failing to reach a compromise despite concessions from the Gulf states.

"We have to be clear about the reasons which hamper progress towards reaching the FTA agreement, and in our view, these reasons [do not] come from the GCC council's side, even the political reasons," Oman's foreign minister, Yusuf bin Alawi bin Abdullah, said in a speech at a GCC-EU Joint Council meeting in Abu Dhabi.

Mr. Bin Alawi said Gulf states had offered concessions to reach an agreement—including some "considered intervention in our internal affairs"—but the EU didn't offer any compromise. He didn't elaborate on the concessions.

The Wall Street Journal points out that the six states of the Gulf council and the EU have struggled for more than 15 years to reach an agreement on free trade between the two blocs. But limits on foreign investment in the Gulf and laws that prohibit Europeans from holding majority stakes in companies have stalled a deal.

The joint-council meeting comes amid continued political unrest across the Middle East, with European countries playing a key role under the NATO umbrella in the battle against Muammar Gaddafi's regime in Libya.

"We have very close relationships, but the EU has many areas where it can step up its involvement in this vital region," Saudi Arabia's foreign minister Saud Al Faisal said. He called on the EU to take a greater role in finding a solution to the Israeli-Palestinian conflict.

Co-chairing the meeting in Abu Dhabi, the EU's High Representative for Foreign Affairs and Security Policy, Catherine Ashton, said: "We would be very pleased and look forward towards completing the FTA agreement."

The EU established bilateral relations with the GCC countries through a Cooperation Agreement signed in 1988. The Cooperation Council for the Arab States of the Gulf (GCC) is a regional organization created in May 1981.