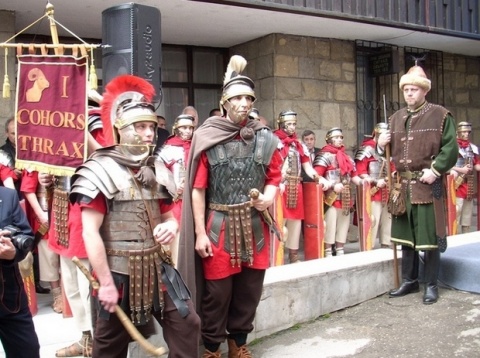 Ancient Roman and medieval Bulgarian warriors could be seen at the opening of the 8th Cultural Tourism Fair in Bulgaria's Veliko Tarnovo. Photo by Darik Radio

The number of foreign tourists who visited Bulgaria in the first two months of 2011 grew by 6%, year-on-year, a senior official announced at the opening of the Cultural Tourism Expo in Veliko Tarnovo.

According to Ivo Marinov, Deputy Minister of Economy, who is in charge of tourism, in January-February, Bulgaria saw more tourists from Greece, Romania, Serbia, Turkey, Macedonia, the UK and Russia. The visas issued to Russian tourists in January were 50% more than in the same month of last year.

Marinov also announced that Bulgaria's revenues from foreign tourists in the first two months of 2011 amounted to EUR 109 M, a 5% increase year-on-year.

The participants in the Veliko Tarnovo cultural tourism expo expressed optimism about the prospects of Bulgaria's tourism in 2011.

According to Blagoy Radin, head of the Bulgarian Association of Hotel and Restaurant Owners, 10%-15% more foreign tourists will visit the country over the summer than during the 2010 summer season.