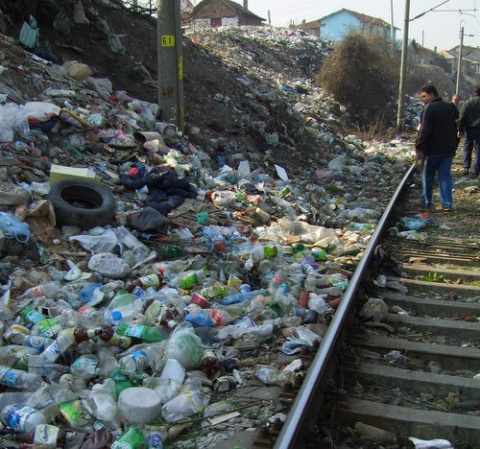 Bulgaria's National Company "Railway Infrastructure" (NKZI) is considering fencing off the railway line in the Sofia Roma-populated quarter "Fakulteta" in order to protect the trains from the immense amounts of trash there.

A total of 30 tonnes of garbage were collected by the NKZI on Monday from the 600-meter section of the railway line passing through the Roma ghetto.

Because of the piles of trash tossed on the railway line by the residents of Fakulteta, the trains going through the quarter are forced to move at a speed of only 25 km/h in order to avoid incidents, with a maximum permissible speed of 90 km/h in the section.

The railway line passing through Sofia' Roma ghetto was last cleaned in 2008. The NKZI has considered various solutions in addition to building a wall to fence off the line, which might turn out to be rather costly.

Those include setting up recycling stations paying the locals for the waste they turn in which could stimulate them to forgo piling the trash on the railway line.

NKZI's 2011 cleaning of the Fakulteta railway section will continue until April 20; according to the company, some 10 000 cubic meters of trash will be removed from the quarter, which will cost it BGN 60 000.

The Roma residents of Fakulteto have expressed various opinions regarding the plans of NKZI to build a wall along the railway. Few of them have helped the railway workers to remove the piles of trash, with the notable exception of a group gathered by a local Protestant pastor, according to bTV.