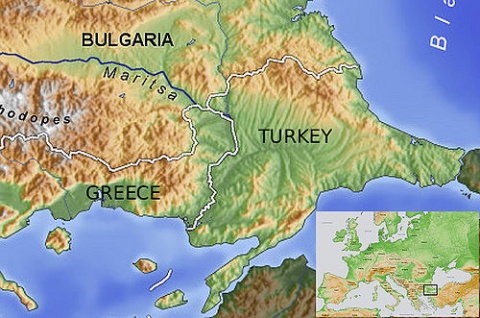 Descendants of Bulgarian refugees from European Turkey are claiming up to USD 10 B in compensations for real estate properties abandoned in 1913-1925. Map from Wikipedia

Organizations of the descendants of Thracian Bulgarians are claiming that the Turkish state owes them as much as USD 10 B for real estate properties their ancestors left behind in today's European Turkey - and that these claims have been recognized with the Treaty of Friendship between Bulgaria and Turkey signed in the Turkish capital Ankara (also known as Angora at the time) on October 18, 1925 (the so called Angora Treaty).

All of the 125 MPs present in the Parliament Friday (out of a total of 240) voted in favor of the motion to accelerate the work on the compensation demands from Turkey, which was initiated by the nationalist party Ataka.

The MPs of the ethnic Turkish party DPS (Movement for Rights and Freedoms) boycotted the voting.

The draft proposal was initially discussed on Wednesday but Bulgarian Foreign Minister Nikolay Mladenov called upon the MPs to make its text as clear as possible so as to avoid stirring up controversies in the relations between Bulgaria and Turkey.

At the same time, he believes that a clear-cut text of the proposal would actually help speed up the talks with Turkey in the bilateral commission. Thus, the proposal was rewritten in the sense that it is now calling for accelerating the work of the commission.

The ethnic Turkish party DPS made it clear that it was not opposed to the proposal in principle but that it abstained from voting because it was tabled by the nationalist party Ataka, while it should have been tabled either by all parliamentary groups together, or by the government.

The adopted proposal assigns to the Cabinet to collect all possible information about the Bulgarian claims - referring to real estate of Bulgarian refugees from Turkey but also to Bulgarian cultural monuments in Turkey, and to properties that used to belong to the Bulgarian Exarchate, i.e. the independent Bulgarian church set up in the Ottoman Turkish Empire in 1870 - and to draft a financial analysis of the compensation demands, including the accrued interest.

Some 250,000 Bulgarians fled their homes in Eastern Thrace after the Second Balkan War in 1913, when Turkey, back then still the Ottoman Empire, seized the opportunity to reclaim some of the territories the Ottoman Empire had lost in 1912-1913 to the Balkan Allies in the First Balkan War.

During his visit to Bulgaria in October 2010, Turkish Prime Minister Recep Tayyip Erdogan demonstrated good will on the issue.

"Wherever the claims are legally founded, we are going to satisfy them," Erdogan said in Sofia Monday. In turn, Bulgarian Prime Minister Boyko Borisov said he had many times urged all Bulgarian citizens with claims on properties their ancestors left behind in Turkey to provide all documents available to the Bulgarian state so that diplomatic action can follow up; however, no such documents have been turned in to date.

The major grounds of the Bulgarian Thracian compensation claims for Turkey is the Angora Treaty of 1925, whose full text is available in English HERE (Derived from the website of the Hungarian Institute in Munich)