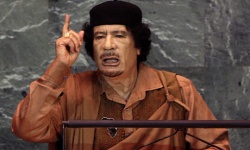 Embattled Libyan strongman Muammar Gaddafi has sent a message to US President Barack Obama, according to Libya’s official news agency.

The message has been sent "following the withdrawal of America from the crusader colonial alliance against Libya,"  the JANA agency has said, without disclosing further details. Last Sunday, two weeks after the start of Operation Odyssey Dawn against Libyan dictator Muammar Gaddafi, the USA said it was ending its combat role in Libya in order to shift the operation to its European allies.

However, on Monday, the US accepted NATO's request to extend their participation in the military operation in Libya by 48 hours.