Bulgaria May Head Toward Subtropical Climate 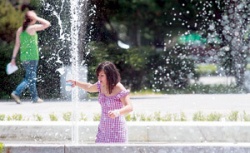 The average temperatures in Bulgaria's towns and cities has risen by between 1.2 and 2.5 degrees Celsius in the past 2 decades, while a 30% drop has been registered in average rainfall.

Furthermore, as much as 13% of the country's forest territory has disappeared over the same period, while snow covers have started melting 40% faster, the Bulgarian Telegraph Agency says, citing the "Coalition for Climate – Bulgaria" environmental organization.

Bulgaria's climate will change from moderate to subtropical by 2050, the organization has claimed, basin their forecast on data from the country's Academy of Sciences.

Recently, it was predicted that Bulgarian capital Sofia's average temperatures may increase to reach those of the Greek city of Thessalon?ki by 2035, according to a report ordered by the country's Environmental Ministry.

Temperatures may increase by 5 degrees Celsius, while average rainfalls may drop by over 15% in the course of the next 24 years in Bulgaria, the report's worst case scenario predicts