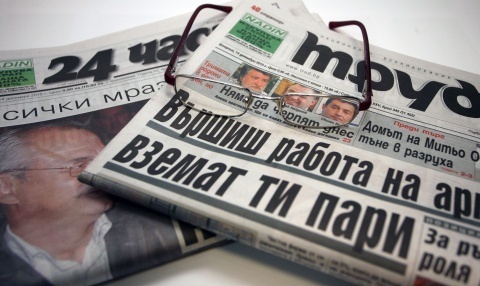 Trud and 24 Hours newspapers are some of the largest-circulation dailies on Bulgaria’s media market. Photo by Sofia Photo Agency

The ownership of WAZ Mediengruppe assets in Bulgaria, which include the two wide-circulation Trud and 24 Hours newspapers, may change hands again after one of its current partners tried to organize a mini coup.

"It is possible to split the media group into two newspapers, which will definitely not be an easy task, but it is all about negotiations. It is also possible to sell the media group to a strategic investor, who should first prove that his interests concern only and exclusively the media market," Hristo Grozev, a partner in BG Privatinvest Ltd, told bTV channel.

Grozev, who represents the Vienna-registered BG Privatinvest Ltd, controlled by himself, Austrian Karl Habsburg, and German Daniel Rutz, accuses their Bulgarian partners of an attempted illegal corporate take-over of the newspapers.

Bulgaria's trade registry has blocked the illegal transfer of a 83% stake in the holding, which is now called Media Group Bulgaria, to Ognyan Donev chairman and majority owner of Sopharma, the biggest, Bulgarian generic drugmaker, and Lyubomir Pavlov, former chairman of the Sofia-based Municipal Bank, Grozev said.

"Three years ago Bulgaria was a country with no rule of law. I think this changed over the last one or two years. The decision of the Trade Registry proves one more time that Bulgaria now is a country of the rule of law," he commented.

According to Grozev the Bulgarian partners took all decisions single-handedly.

"We decided to pretend for one-two days that all decisions are being taken with a consensus, but later on Lyubomir Pavlov single-handedly commanded all decision making. This is the reason why we ended up in the current situation," Grozev pointed out.

He explained this is exactly how the editors-in-chief of 24 Hours and Trud were replaced.

"I felt really awkward after this decision was taken. After all at our very first joint press conference we had announced that the strong personalities of Tosho Toshev and Venelina Gocheva are part of the reason why we purchased the two newspapers," Grozev admitted.

Vienna-registered BG Privatinvest Ltd acquired a majority stake in the publisher of the two wide-circulation Bulgarian Trud and 24 Hours newspapers in the middle of December last year, while the remainder was held by local businessmen Ognyan Donev and Lyubomir Pavlov.

The new owners acquired 100% in WAZ Zeitungsgruppe Bulgarien (ZGB). The price of the deal was not disclosed, but reports said it ranged from BGN 60 M to BGN 120 M.

At the beginning, BG Privatinvest was controlled by Karl Habsburg, Daniel Rutz and Hristo Grozev. Austrian Karl Habsburg held a 33-percent stake in the newly-established company.

A check in the Austrian Business Registry has shown that recently German national Daniel Rutz has quit BG Privatinvest and now the other two partners hold a 50% stake each.

The Bulgarian partners of BG Privatinvest include Ognyan Donev, chairman and majority owner of Sopharma, the biggest Bulgarian generic drugmaker, and Lyubomir Pavlov, former chairman of the Sofia-based Municipal Bank.

Even before the deal the two are known to have been on good personal and professional terms since Pavlov holds a 16% stake in Sopharma via a financial consultancy.