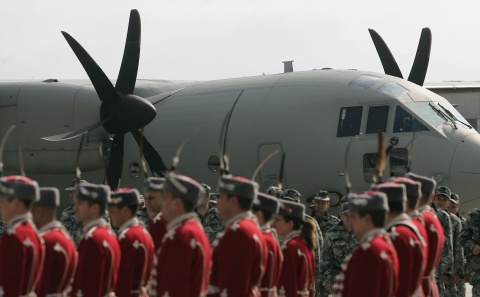 The ceremony at the Vrazhdebna air field near Sofia was attended by Defense Minister Anyu Angelov and Interior Minister Tsvetan Tsvetanov, though not by Prime Minister Boyko Borisov, who was originally scheduled to appear.

Spartan C-27J is the newest equipment of the Bulgarian Air Force. Bulgaria was supposed to purchase 5 Spartan planes, and received the first one in 2007, and the second one in 2008.

As the Bulgarian Defense Ministry ran into a staggering deficit in 2009, in December 2010, the efforts of the government to renegotiate the deal with the Italian company bore fruit.

The contract with Italy's Alenia Aeronautica for the purchase of 5 Spartan C-27 tactical transport military aircraft was signed in February 2006 by former Defense Minister Veselin Bliznakov for a total of EUR 91.8 M. By the spring of 2010, Bulgaria had received the first two airplanes, and still owed BGN 57.6 M to the Italian company.

Defense Minister Anyu Angelov's team managed to renegotiate the deal by giving up the fourth and fifth planes, and transferring the 20% of the cost of a plane's cost paid as an advance payment on the fourth plane to the total sum owed for the third plane. In addition, the overall price of the Spartan planes was reduced by EUR 12 M.

As part of the renegotiated settlement, the Bulgarian government also signed a maintenance contract with Alenia Aeronautica, under which it will pay EUR 25 M for maintenance costs from 2012 until 2017.

Spartan C-27J is designed for military transport tasks such as the transportation of troops and supplies, and for their airborne landing, serving the needs of the air force and the navy.

However, Bulgaria also plans to use the plane for transportation in organ transplants and medical evacuations, special tasks of the Interior Ministry, and international operations such as the rotation of Bulgarian troops in Afghanistan.

One of the Bugarian Spartan planes was used last week in the solving of the hostage crisis in Bulgaria's Sliven when the government flew in a SWAT team and psychologists from Sofia.

The Italian company has also completed a special hangar for the maintenance of the three Spartan planes, which cost EUR 8.3 M, according to the head of the Bulgarian Air Force Major-General Konstantin Popov.

For the time being, Bulgaria has only three pilot teams trained to fly a Spartan, and a third one is being prepared. However, one of the three Spartans is in need of repairs that will cost BGN 1.5 M.