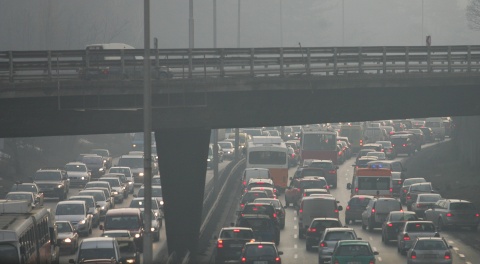 Bulgaria's capital Sofia will experience a transport blockade on Saturday over overlapping processions and events. Photo by BGNES

The traffic in Bulgaria's capital Sofia will likely be rather tense on Saturday as a protest rally, a motorcycle march, and an international football match will close many of the major streets and boulevards.

The holding of the three major events on the same day will expected to cause serious traffic problems in Sofia where traffic is usually quiet on weekends even though it is usually jammed on week-days.

Hundreds of motorcyclists are expected to take part in a motorcycle procession fro the opening of Moto-Season 2011 from 7 am till noon, starting at the Sofia beltway near the National History Museum and proceeding to the downtown. The procession will then go from the downtown to the beltway again in the afternoon.

A protest rally against the policies of the Borisov Cabinet organized by the opposition Bulgarian Socialist Party will take place Saturday morning, also blockading major down streets until noon.

In the later afternoon and evening, the streets around the Vasil Levski national stadium in the downtown will be closed because of the Euro 2012 football qualifier between Bulgaria and Switzerland.