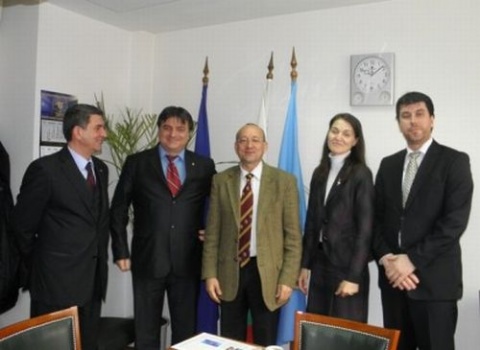 The BCCI head Tsvetan Simeonov (middle) with the leadership of the Macedonian-Bulgarian Economic Chamber. Photo by BCCi

The Bulgarian Chamber of Commerce and Industry (BCCI) has welcomed in Sofia the leadership of the newly-founded Macedonian-Bulgarian Economic Chamber.

The Macedonian-Bulgarian Economic Chamber (MBEC) was set up on February 24, 2011, in Skopje, by 51 business founders.

On Tuesday, its chair Borislav Zahariev, CEO of Capital Bank in Macedonia, and Ljubomir Josifovski, director of the MBEC presented their program and priorities to the chair of the BCCI Tsvetan Simeonov.

Ivan Zherkov, commercial attach? in the Bulgarian Embassy to the Republic of Macedonia, who was one of the main initiators for the creation of the MBEC and is a member of its supervisory council, also attended the meeting in Sofia.

The Macedonian-Bulgarian Economic Chamber in Skopje intends to boost the business ties between the two countries as well as their positioning on the EU market.

According to Tsvetan Simeonov, BCCI chair, the establishing the Macedonian-Bulgarian Economic Chamber means "the opening of one more window for the business in Macedonia and Bulgaria." He underscored the fact that the MBEC was initiated by entrepreneurs, which means that they were ready to make such a step, and vowed the support of the BCCI.

Another matter of the talks of the business organizations in Sofia was the relations of the BCCI and the Macedonian Economic Chamber, a national organization based in Skopje. The delegations agreed on a program of bilateral visits.

Commercial attach? Zherkov reminded that in February 2011 the Interior Ministers of Bulgaria and Macedonia Tsvetan Tsvetanov and Gordana Jankuloska opened a joint contact center for police and customs cooperation at the Gyueshevo border crossing point.