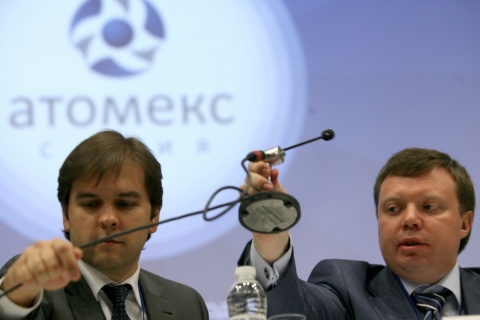 Russian state nuclear corporation Rosatom has set March 31, 2011, as a deadline to reach an agreement with Bulgaria over the construction of the latter’s Belene nuclear power plant.

“If the agreement, 12th in line, for the construction of the Belene NPP is not signed until March 31, Rosatom has no legal grounds to continue working on the project,” declared the representatives of Rosatom Sergey Novikov and Kirill Komarov during a briefing in Sofia where they took part in a forum of nuclear suppliers.

Komarov has made it clear that Rosatom is not haggling with Bulgaria for the price of the construction of the 2000-MW Belene nuclear plant as it is firm on the price it has set – EUR 6.3 B.

“We are no longer holding talks for the price of Belene. Our position has been made clear. We have declared all figures. The price is EUR 6.3 B if we are talking about a fixed price, i.e. it does not take into account the inflation, and projects that the Belene NPP will be built by 2017.,” declared Komarov, CEO of the nuclear energy complex of Rosatom and director of Atomenergoproekt.

He did point out that it was the Bulgarian government of the center-right GERB party and Prime Minister Boyko Borisov that had asked the Russian side to offer a fixed price, i.e. one that does not allow for additional “escalation costs” over inflation and other factors.

The price of EUR 6.298 B was set in a non-binding memorandum between Rosatom and the Bulgarian National Electric Company NEK in November 2010 during a visit to Bulgaria of Rosatom head Sergey Kirienko. Subsequently, however, the Bulgarian government made it clear it wanted a lower price, perhaps as low as EUR 5 B. The original price in the 2008 contract between NEK and Rosatom subsidiary Atomstroyexport provided for a price of EUR 3.997 B plus any respective escalation costs to be factored in later.

Komarov did say in Sofia on Wednesday that Rosatom is also prepared to strike a final agreement with Bulgaria with “escalation costs”.

“The existing documents say that the price is fixed, and does not provide for the option with escalation costs but we are ready to work with any formula. We don’t have a problem with that. In the cast with fixed price, the Russian side assumes voluntarily the risks associated with the construction of the Belene NPP because by 2017 the inflation might be higher than the current values,” he stated.

Sergey Novikov, spokesperson of the Russian state nuclear corporation Rosatom, declared that Russia has already had precedent in which it built a nuclear power plant with a fixed price set in an international contract. This was the case of the Tianwan NPP in China, the largest project of nuclear cooperation between Russia and China, whose price was fixed in the 1990s. Novikov said that even though the construction of the plant was delayed, and the reactors were completed only 2007 and 2008, the price laid in the inter-governmental agreement was not changed.

Bulgaria’s Prime Minister Boyko Borisov has generally insisted on a new price fearing that the provisions of the 2008 contract with the Russians made by his predecessor Sergey Stanishev had legal loopholes allowing the Russian company to demand additional sums of money for the Belene construction.

“In the case of Belene, the price has been fixed, and it will remain the same even if the plant is not completed in 2017 but in 2018, or in 2019, etc,” the Rosatom Spokesperson stated.

The only official Bulgarian reaction to the "ultimatum" about the deadline and price offer for Belene issued by Rosatom was a brief comment by Bulgarian Economy and Energy Minister Traicho Traikov, who said that Bulgaria had made it clear it was not satisfied with the price of EUR 6.3 B, and that the talks were continuing.

Later on Wednesday, apparently acting on concerns caused by the situation in Japan's Fukushima NPP after the recent devastating earthquake there, the European Commission confirmed that it wants to reexamine the Belene NPP project - once Bulgaria finds an investor for it - even though it already approved it back in 2007

Komarov said that Rosatom has not been formally notified of the idea of Bulgarian Minister of Economy, Energy, and Tourism Traicho Traikov to “reshuffle” Bulgaria’s nuclear projects by installing one of the two reactors meant for the Belene NPP into the existing Kozloduy NPP, and to give up the second one.

According to the representatives of Rosatom, however, such a move would require additional investments of USD 1 B into the Kozloduy NPP, and would delay the launch of the new reactor by 2-3 years.

“We have a contract signed between Bulgaria’s NEK and Atomstroyexport, Rosatom’s subsidiary. It has outlines all possibilities. If the Bulgarian government gives up on the construction of the Belene NPP, we are going to act according to the legal document,” Komarov said, while not specifying explicitly if Russia will sue Bulgaria over the indenmity.

With respect to the communication between NEK and Rosatom, the spokesperson of the Russian corporation Sergey Novikov pointed out that NEK has sent Rosatom a list of 12 questions. Based on their answers, the Bulgarian government will decide whether to build the Belene NPP.

Rosatom has already send the replies back to NEK, and is expecting the Bulgarian position, Novikov said.

The remarks of the Rosatom executives made it clear that while they might be willing to extend the talks for agreeing on a final price for Belene, they would do that only if a new agreement is concluded.

Later on Wednesday, Genadiy Tepkyan, Vice President of Atomstroyexport, announced that his company and NEK held talks on the inflation index on Tuesday but declined to provide details.

According to previous statements of Bulgarian Economy Minister Traicho Traikov, the inflation index for calculating escalation costs offered by the Russians provides for between EUR 500 M and EUR 2.5 B on top of the original price of EUR 3.997 B set in 2008.

Tepkyan also indicated if a new agreement on Belene is not made now, this will mean the end of the project, with all due consequences for Bulgaria, i.e. indemnities. This is not the first time the Russian side has issued such warnings.

“Bulgaria should not give up on its own nuclear energy because of the policies of other states,” Komarov commented, and expressed hopes that the Bulgarian Nuclear Regulation Agency will approve the technical project for the Belene NPP as soon as possible.

Komarov further announced that the construction site in the Bulgarian Danube town of Belene will be ready for the start of the installation of the first 1000-MW reactor about September 15, 2011. The ground for the building of the second reactor will be prepared by July 2012.

The Russian executives explicitly defended the safety and reliability of the reactors of the VVER-1000/V-466B to be installed in Belene saying that they have “unique” protection mechanisms, and that concerns over the problems in Japan’s nuclear facilities caused by the recent 9.0 earthquake should not affect the Belene project. They did say that additional guarantees against earthquakes can be included but that will cost extra.

The Areva Holding together with Siemens is actually already involved in the construction of Belene as a subcontractor to Russian state company Atomstroyexport.

For the time being, however, the construction of the 2000-MW Belene NPP remains stalled as Bulgaria and Russia are unable to agree on a final price. In addition to the price, the gravest concern of the Bulgarian Borisov Cabinet has been to find a "strategic European investor."

It seemed that progress was achieved on both issues in fall of 2010 but subsequent developments have failed to confirm that.

This sum is still not final since the document is not binding; a final binding agreement for the establishing of a joint company for Belene was expected to emerge in 4-5 months, according to Rosatom head Sergey Kirienko, who was in Sofia to sign the document.

The other non-binding documents on Belene signed at the same time provided for participation in the project of Finnish company Fortum with a share of 1%, and of French company Altran Technologies with a share of 1%-25%. NEK is to keep a majority share of 51%, while Rosatom is also expected to have a share of 25%.

Serbia has expressed interest in acquiring a share of 5%-10% but the talks for that have not been finalized yet. It is unclear what share Areva might go for if it ultimately decides to seek participation in Belene.

Subsequently, in the last months of the Stanishev government in early 2009, Putin offered Bulgaria a Russian state loan of EUR 4 B, which ex PM Stanishev refused.

Under Bulgaria's preliminary contract with Atomstroyexport signed in 2008, the construction of the Belene plant with two 1000-MW VVER nuclear reactors is supposed to cost EUR 3.997 B.

During his visit to Sofia in November, Sergey Kiriyenko, CEO of Russian state nuclear energy company Rosatom admitted that Bulgaria and Russia had made a mistake by not specifying the exact raise of cost for the construction of the Belene nuclear power plant.