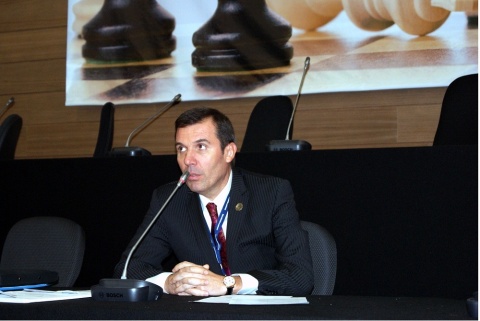 The President of the European Chess Union Silvio Danailov, a Bulgarian chess manager, and world-renowned Russian master Garry Kasparov are moving to urge the introduction of chess in European school curriculum.

Danailov and Garry Kasparov are going to meet with Androulla Vassiliou, EU Commissioner for Education, Culture, Multilingualism, Sport, Media and Youth, on March 21 in Brussels to discuss their idea.

The introduction of chess in school curriculum in Europe was one of the major campaign points of Bulgaria's Silvio Danailov that helped him get elected to head the European Chess Union (ECU).

Danailov hopes to increase European youngsters' interest in chess. He is the creator of the Junior Masters tournament in Bulgaria. During its last edition in 2009, a total of 1 500 Bulgarian kids took part in it.

In the ECU elections in September 2010, Danailov, who is the personal manager of Bulgarian champion, Veselin Topalov, won with 30 votes, against the other main contender - Turkish Chess Federation President, Ali Nihat Yazici, who got 24 votes.

Danailov's victory is attributed to his election promise to work for the development of the ECU and the sport, for making it both professional and popular in schools.