Palfreeman Appeal Based on Lack of Fair Process - Father 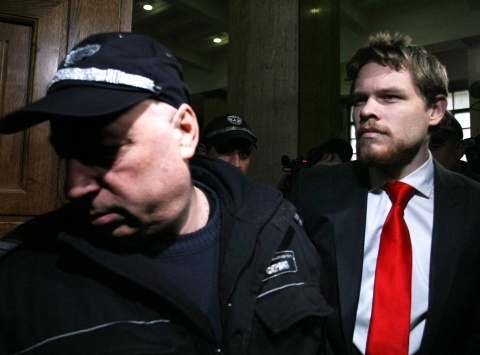 Jock Palfreeman is pictured here as he enters Sofia Court of Appeals on January 19, 2011 flanked by a dozen prison police guards. Photo by BGNES

The appeal of a young Australian, who stabbed to death a Bulgarian three years ago, is based on the "fundamental lack of fair process", his father has announced.

The appeal is based on the "fundamental lack of fair process" for my son in the previous two courts and ignorance towards "evidence that supports Jock's story", Dr Simon Palfreeman said, as cited by AAP.

The legal team of Australian Paul "Jock" Palfreeman lodged an appeal to the Bulgarian Supreme Court against his 20-year jail sentence for murder this week, pinning their hopes on what is the final avenue of appeal for him in Bulgaria.

A three-member panel of the Sofia Court of Appeals last month upheld on all counts the verdict of Sofia City Court. The judges declared Australian citizen Jock Palfreeman guilty and sentenced him to 20 years in prison for the murder of Andrei Monov.

The Australian Jock Palfreeman argues that he intervened only to go to the aid of two Roma gypsies being beaten by the group of boys, part of which Andrei was.

Palfreeman wants his original murder conviction overturned on the grounds that the legal process was deeply flawed. According to him the original court decision and the whole trial and case has been flawed and wrong, marred by procedural lapses, discrepancies in evidence and intentional oversights.

The defence has harshly criticized the police for failing to secure the crime scene, get CCTV footage and call in front of the judges all the important witnesses.

Antoan Zahariev, who was wounded by Australian Jock Palfreeman in the 2007 street brawl in Sofia, has slammed the twenty-year jail sentence as "mockery".

The parents of Andrei and the wounded boy are expected to launch an appeal of their own, demanding that Jock gets the heaviest sentence in Bulgaria – life without parole.