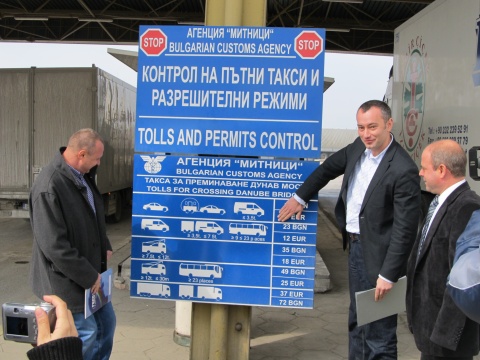 Bulgarian Foreign Minister Nikolay Mladenov hides the figure for passing through the Danube Bridge from Bulgaria into Romania during a visit in Ruse on March 6, three days before the Bulgarian Cabinet unilaterally reduced the levy. Photo by BGNES

Bulgaria's government reduce three times the levy for passing through the only bridge on the Danube connecting Bulgaria and Romania.

Thus, the fee per car crossing from Bulgaria into Romania through the Danube Bridge linking Bulgaria's Ruse and Romania's Giurgiu is brought down from EUR 6 to EUR 2.

The step is unilateral since Romania has not taken the same measure, and cars crossing into Bulgaria will continue to be charged EUR 6 for the time being.

"We believe that with this measure we are creating much more decisive prerequisites for the integration of the region of Ruse with Giurgiu and we improve the tourism and economic potential of the entire area," Bulgarian Regional Development Minister Rosen Plevneliev has commented.

He explained that the reduction of the levy will technically mean EUR 3 M less for the state budget that loss is expected to be compensated by the increased traffic.

"The number of Romanian tourists in Bulgaria increased dramatically in the past year, and the Bulgarian government is now reacting adequately to that. We hope to have more and more Romanian tourists," the minister said.

Wednesday's government decision is expected to enter into force within two weeks.

The residents of the city of Ruse have protested numerous times against the bridge levy, hoping that it would abolished, or at least reduced substantially.

The reduction refers only to cars. While the current fee for crossing via the Danube Bridge is EUR 6 per car in one direction, light trucks and vans have to pay EUR 12, trucks below 12 tons – EUR 18, and trucks above 12 tons – EUR 25.

In December 2010, Bulgaria's Foreign Minister Nikolay Mladenov expressed hopes that the government will soon be able to modify the levy for passing through the Danube Bridge linking Bulgaria's Ruse and Romania's Giurgiu.

In September 2010, during a visit to Ruse, Bulgaria's Finance Minister Djankov said the Danube Bridge fee for cars should be reduced to EUR 1.5-2. He revealed the present Bulgarian government held talks with the Romanian side three times in order to reduce the fee. He also said he expected progress around the end of the year, and that Bulgaria has approached the EU institutions asking if it can reduce the levy independently even if the Romanian side does not agree to do so.