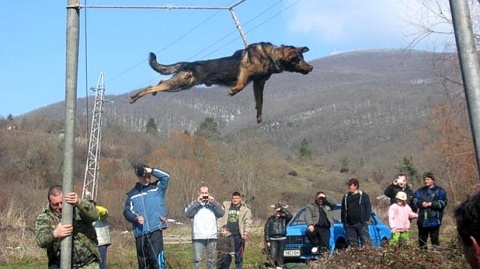 Bulgarian PM Borisov has condemned the practice of a pagan ritual known as "dog spinning" still surviving in the southeastern village of Brodilovo. After it was banned in 2005, the ritual was performed again on March 6, 2011. (pictured). Photo by Webcafe

Boyko Borisov, Bulgaria's Prime Minister has opposed the ancient ritual of dog spinning, which was recently renewed in a southeastern village, declared it barbarian and called for sanctions.

After it was banned by the local authorities in 2006, on Saturday, March 6, the ritual was performed again by Brodilovo.

The Prime Minister has discussed the issue with Chief Prosecutor Boris Velchev and both have agreed that the new animal protection law should include sanctions for animal torture.

According to the draft law on animal cruelty incrimination, which was accepted by the Parliament on first reading in February, those who injure an animal on purpose will face probation and a fine of BGN 3000.

The Mayor of the Tsarevo Municipality, where Brodilovo is located, the southeastern Bulgarian village that has renewed the ancient ritual, however, has stated there is nothing wrong with it.

Even though he personally prohibited the tradition in 2005, when the Brodilovo citizens faced sanctions, Mayor Petko Arnaudov has explained nothing wrong is supposed to happen to dogs 'participating' in it.