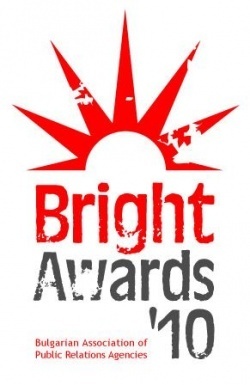 The official logo of the BAPRA Bright Awards 2010. Photo by BAPRA

The Bulgarian Association of PR Agencies (BAPRA) has received a record number of entries for its annual "Bright Awards".

A total of 25 PR agencies with a total of 65 projects and campaigns are participating in the second edition of the BAPRA Bright Awards, the most prestigious PR contest in Bulgaria, BAPRA Chair Maxim Behar announced Tuesday.

In comparison, the 2010 edition of the BAPRA Bright Awards features 22 agencies with 59 bidding projects.

As of March 8, 2011, a jury of top international experts is evaluating the submitted projects. The winners will be announced at a special ceremony in mid April.

The BAPRA Bright Awards jury is chaired by the world's most renowned PR analyst Paul Holmes, founder and CEO of the Holmes Report, an editor and publisher with more than 20 years of experience in analyzing PR techniques and providing PR counseling.

"A record number of PR campaigns were submitted this year. Most of the companies that presented their entries are not members of BAPRA, which clearly demonstrates that the BAPRA Bright Awards are gaining greater and greater popularity and have become established as the first contest for professional achievement in the PR business," says BARPA head Behar, who runs the largest Bulgarian PR agency M3 Communications Group, Inc.

The BAPRA Bright Awards will be presented in six categories: "Sustainable Development Campaign", "Special Event", "Innovative Campaign", "Campaign Realized by an Internal Department", "Communications Campaign of the Year", and "PR Agency of the Year".

BAPRA Bright Awards is the first PR contest in Bulgaria with a jury made up of international judges. In addition to its Chair Paul Holmes, the jury features experts from the USA, UK, Romania, Germany, Slovakia, Denmark, Finland, the Republic Republic, France, Russia, and Belgium, including influential figures in global PR and members of the International Communications Consultancy Organization (ICCO).