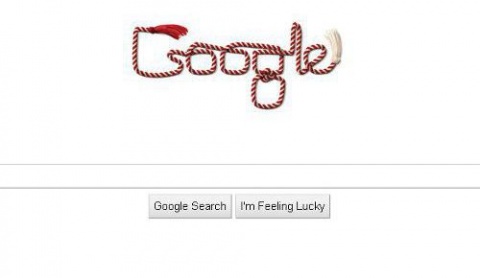 The internet search engine Google woke up Tuesday morning wearing the bright red and white colors of the Bulgarian martenitsa. Snapshot from Google

The largest Internet search engine Google, put on Tuesday morning a Bulgarian martenitsa and wrote its traditional logo in red and white yarn tied with tassels.

After the reported martenitsa invasion of China manufacturing plants, Google changed its front page in honor of the traditional Bulgarian holiday.

The Bulgarian symbol is displayed on google.com and shines with its bright colors when the page is accessed from Bulgaria.

The site calls the change of its front page on the occasion of different holidays doodle. It began in the now-distant 1998. Every internet user can send a proposal for the marking of a certain date or event.

The Bulgarian phenomenon, known as martenitsa, is becoming more and more popular around the world.

The Bulgarian community in Australia has been the most active this year by decorating in red and white a tree in Brisbane. Bulgarians from far-away places such as New Zeland and even Macao are taking part in the Project Martenitsa initiative as well.