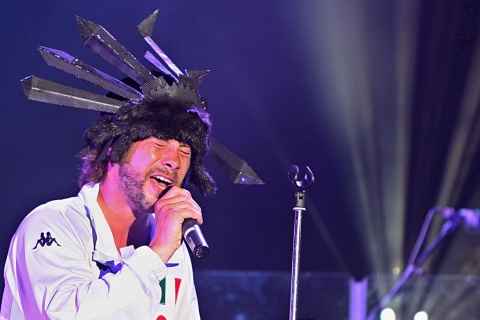 Jamiroquai might arrive to Bulgaria to participate in the first edition of the pop and rock music festival Elevation. Photo by EPA/BGNES

British acid and funk jazz band Jamiroquai might be one of the headliners at the new Bulgarian pop and rock music festival Elevation.

According to unconfirmed information at a Bulgarian music website, the negotiations with the band are not complete yet, but the chances of them coming to Bulgaria are big.

At the official press conference last week, the organizers of Elevation 2011 said that they have negotiated at 99% the participation of a popular funk band, one of the most popular hip hop bands and a young singer who has already topped the charts.

Rumor has it that the stars are Jamiroquai, Cypress Hill, Bruno Mars and The Chemical Brothers. If the organizers confirm the rumors, Elevation 2011 will become a serious threat to another Bulgarian festival, Spirit of Burgas, which has announced only one headliner so far – Moby.

The bands that are certain for the Elevation 2011, which will be held June 24-25 in the Bulgarian town of Razlog, are 30 Seconds to Mars, Hurts, Parov Stelar, Dog Eat Dog, Gentleman and the Evolution, Cyanna, Monyx, Sepuko 6 and Odd Crew.