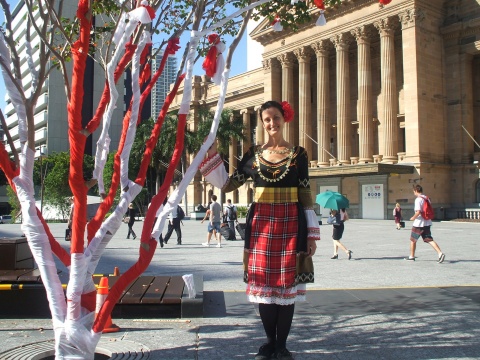 Trees adorned with the Bulgarian traditional martenitsa are to spread joy around the world on Tuesday in several different cities.

The initiative comes from a group of Bulgarian emigrants across the globe and their Project Martenitsa aiming at promoting Bulgarian traditions and culture and creating a positive image of Bulgaria.

The idea to decorate trees with martenitsas belongs to Bulgarian artist, Maryan Milanov, who in 1992 decorated the first three in the southern Bulgarian city of Stara Zagora.

The Project Martenitsa abroad was launched in the the Australian Queensland capital, Brisbane, after the Lord Mayor of Brisbane, Campbell Newman, personally approved the initiative and the sponsorship of the Project by the Brisbane City Council. The central square, King George, will sparkle with bright red and white from March 1 until the weekend and dancers from the Bulgarian Dance Group ?Horo? will be giving away martenitzas to pedestrians.

The Project's initiators have a website with pictures and information about the tradition. There is also an international contest titled "Martenitsa Tree in My City" open to participants around the world.

The organization wants to collect enough material to produce a documentary about the ancient tradition as a joint project of the Australian TV channel SBS and the Bulgarian National Television, BNT.

The second city to join the Project Martenitsa was Christchurch, New Zealand but the devastating earthquake just a week ago not only destroyed the most beautiful New Zealand city and shattered peoples lives, it also made the tree decoration impossible. However, the Bulgarian community in Christchurch is determined to give its gift - the Martenitsa tree - to Christchurch and its citizens as soon as the city begins to recover.

Despite the Christchurch tragedy, New Zealand will have its own tree – the Bulgarian organization in Aukland, the country's largest city, will decorate a tree in Marlborough Park on the North Shore. A workshop and open lesson about the Bulgarian traditions will be held under the tree.

Just days before Baba Marta was scheduled to arrive, another city obtained permission to decorate a Martenitsa Tree. Macao is frantically preparing to get ready for the big day.

Bulgarian towns are taking on the challenge as well - Tryavna has already joined Project Martenitza.

For more information, to join the project or to participate in the photo competition, please visit: http://www.martenitza.org/, or join Project martenitza group on Facebook.

Isabela Shopova from Brisbane, Australia and the largest Bulgarian web portal in the US – www.eurochicago.com have been used as sources used this Novinite.com article .

Eurochigaco have vowed to have a Martenitsa Tree in 2012 in the city of Chicago, home of the largest Bulgarian community in America.