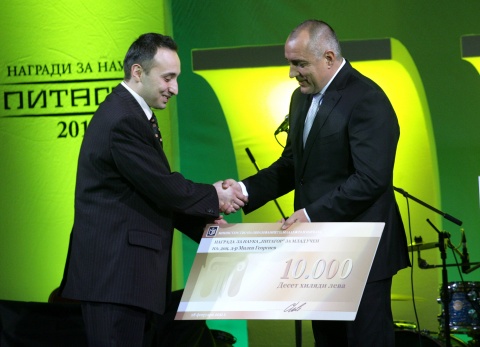 Bulgaria's government handed out its annual science awards for a third year in a row at an impressive ceremony in Sofia.

The winners in the seven categories of the Pythagoras Awards are determined by the Bulgarian Ministry of Education and Science. Each of them received a money award and a statuette authored by Bulgarian Culture Minister Vezhdi Rashidov, who is a renowned sculptor.

The ceremony had an unexpectedly nice feel to it after for the a year the Borisov Cabinet has been at odds with the Bulgarian Academy of Sciences and major universities over budget cuts and controversial restructuring plans.

Prof. Dr. Milen Georgiev, a nominee of the Microbiology Institute of the Bulgarian Academy of Sciences, received the biggest prize of BGN 10 000, which is the Young Scientist category. Georgiev was awarded for his research on the pharmacological uses of the African herb harpagophytum, also known as grapple plant, wood spider, or Devil's Claw. All other winners received BGN 5 000 each.

The head of the National Archaeology Institute with Museum at the BAS, Prof. Margarita Vaklinova, received a special award for archaeology.

"We have found money for highways, we are also going to find money for science," Borisov stated, expressing his content with the fact that all political parties in Parliament have approved the draft new law for the Bulgarian Academy of Sciences.