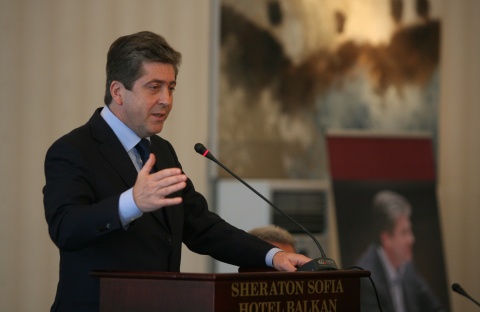 One of the proposals by Bulgaria's President Georgi Parvanov is for introduction of "Second Chance" schools for dropouts. Photo by BGNES

Bulgarian President Georgi Parvanov has presented an idea for creation of electronic register and electronic education passport for students.

The idea was presented in an article, written by Parvanov and five participants in his political project ABV.

The article stated that problems in the education system have always been of interest to Parvanov and pointed out that during the teachers protests in 2005-2007, the president had an active part in the dialogue between syndicates and the government.

Parvanov and his colleagues from the ABV project have presented 12 ideas for development of the Bulgarian school system, which include obligatory pre-school education from 5 years of age and measures for prevention of dropping out of school.

Another idea is the creation of electronic register and electronic education passport for all kids above 5 years of age until 12th grade. The innovations are envisioned to provide updated information about the education and health condition of students, and for their change of schools within and outside the country.

The proposal also envisions the introduction of specific forms of education that will allow dropouts to return and get the relevant degree or professional qualification.

The authors propose that students could catch up on missed material through additional classes or evening schools.

"Based on the practices and experience of some European countries, the idea for introducing a new type of school, "Second Chance", deserves to be discussed. The basis of closed border schools, some of which have been renovated through programs of the Education Ministry, could be used for the realization of the idea," the article said.

According to the authors, important measures include accessibility to educational content such as language and training materials, improvement of external and internal evaluation systems, public-private partnerships, the role of school boards in the education system, linking of secondary education with requirements of higher education systems and the labor market,.

Parvanov has also proposed the creation of Supreme Educational Council to the Education Ministry, which would include prominent education and social activists, scholars and experts. The task of the council would be to discuss "strategic issues of the development of school education".