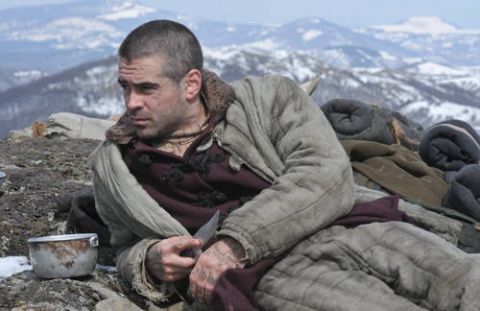 Collin Farrell in a scene from "The Way Back". Photo by imdb

“The Way Back,” an epic drama shot in and around Bulgaria, Morocco and India., did not make it among the Oscar winners at last nights’ glamorous Academy Awards ceremony .

“The Way Back”, directed by Peter Weir and starring Collin Farrell and Ed Harris, as well as a couple of Bulgarian actors in more minor roles, was nominated by the Academy for best achievement in make-up.

The movie follows a group of World War II prison escapees from Russian gulag who embark on a harrowing trek across Siberia, through the Gobi Desert, China, across the Himalayas and finally, exhausted and near death, into India.

The prepping of the movie took place entirely in Bulgaria, which “doubled” for Siberia.

“The King’s Speech,” a historical drama about the BritishKing George VI and his vocal coach, won best picture at the 83rd Academy Awards ceremony late on Sunday.The British period drama too three more prestigious trophies from the ceremony, as Colin Firth was coroneted as best actor, while Tom Hooper was proclaimed  best director, while David Seidler won for his original screenplay.