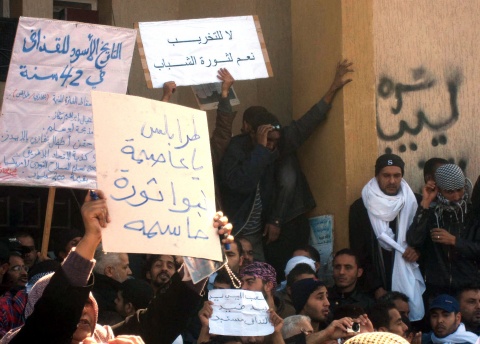 A photograph shows Libyans holding anti-Leader Gaddafi placards (L and C), one (R) reads in Arabic 'No to destruction, Yes to the youths revolution' as they are gathered in a protest in Benghazi, Libya, 21 February 2011. Photo by EPA/BGNES

Forces fighting to topple the Libyan leader Col Muammar Gaddafi have seized the city of Zawiya, 50km (30 miles) from the capital, Tripoli.

The key city saw fierce fighting last week and now correspondents say the centre and its immediate outskirts appear to be wholly in the control of anti-Gaddafi forces.

BBC Middle East editor Jeremy Bowen said pro-Gaddafi forces have tried a couple of times to enter the town, but the rebellion has been going on since 17 February, and they say it is going to continue.

The BBC saw hundreds of demonstrators in the centre of Zawiya.

Some were firing weapons into the air, saying they are protesting peacefully but are ready to fight.

In a televised speech on Thursday, Col Gaddafi addressed the people of Zawiya, saying young people were being duped with drugs and alcohol to take part in "destruction and sabotage".

Eastern Libya has fallen to the uprising, but Tripoli remains in the control of Col Gaddafi, who is facing the biggest challenge to his 41-year rule.

Meanwhile, the UN refugee agency UNHCR says nearly 100,000 migrants have fled from Libya into neighbouring Tunisia and Egypt in the past week.

It warns of a growing humanitarian crisis. Many of the migrants have no way to get home and are sleeping out in the open.