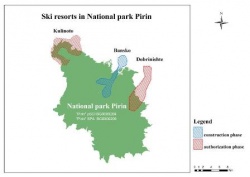 A map by For the Nature environmentalist coalition depicting projects for ski zone development in the Pirin National Park (green area). The blue field is the already-existing Bansko ski zone, the red fields depict the projected Razlog and Dobrinishte area

Controversial plans for a drastic development of ski tracks in the Pirin National Park were announced by Bulgarian companies and towns at the start of the 2011 men's alpine ski World Cup in Bansko.

The plans forsee a boost of the length of already-controversial tracks with close to 200%, raising their total span from 133 km to 333 km, as stated by ruling GERB party MP Lyuben Tatarski, former mayor of local town of Razlog.

The project includes development of the already-existing Bansko ski area, as well as the creation of new centers in the nearby town of Razlog and village of Dobrinishte. The three areas will be infrastructurally interlinked.

Tuesday at a joint sitting the town councils of Bansko and Razlog voted to propose to cabinet to allow them to start the construction of the facilities.

That would require a change in the Management Plan of Pirin National Park, a UNESCO World Heritage site, home to some of Bulgaria's most spectacular nature scenery and numerous habitats and endagnered species.

Environmental organizations, gathered under the "For the Nature" coalition, have already announced an outcry against the proposal, claiming it will lead to an 8-fold increase of the developed area, and to considerable harm to the environment.

"This is a desperate attempt on the part of investors to sell the hundreds of empty apartments and hotels that were built with no control at the foot of the mountain during the real estate bubble," reads the coalition's statement.

Saturday Bulgaria's Minister of Environment Nona Karadzhova did not explicitly say she was against the development plans, although she stated that Bansko and Razlog better consider other development options, such as eco and SPA tourism, in order to take advantage of opportunities during the summer.

The ambitious project will be financed by three companies, Galchev Group (for the Dobrinishte site), Balkanstroy (for the Razlog site), and Yulen (the firm that manages ski facilities in Bansko). The total investment previewed is said to amount some EUR 100 M.