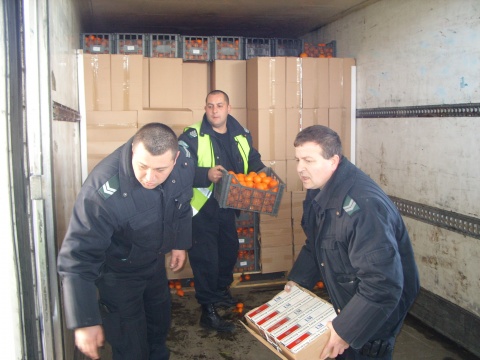 Photo of a prior interception of contraband cigarettes in February. Photo by BGNES.

Bulgarian police arrested 8 persons and detained some 3,300 master boxes of smuggled cigarettes in a large-scale operation directed at a newtork operating across the country.

The operation was carried out in Veliko Tarnovo, Ruse and Varna in northern Bulgaria and in Plovdiv, Haskovo, Dimitrovgrad and Kapitan Andreevo checkpoint to Turkey in the south.

The network, believed to be one of the important contraband groups functioning in the country, has been tracked by police over 4 months, with over 80 special surveillance devices used.

The value of cigarettes detained is estimated to be around BGN 15 M, report authorities. Some of the cigarettes carry Greek brands from the low-price range, while others have been produced in Dubai.

6 more persons believed to be part of the smuggling network are wanted by the police. Authorities are also investigating whether the group is responsible 980 more master boxes detained recently at Kapitan Andreevo.