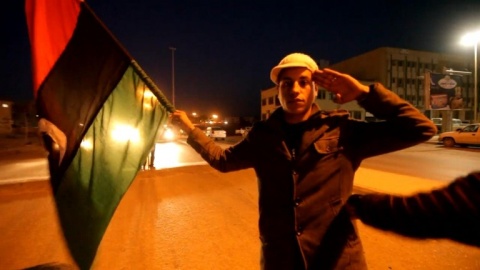 Opponents of Moamer Kadhafi's regime appeared firmly in control of the oil-producing coastal region of eastern Libya on Thursday and confident that the long-time leader's downfall was imminent. Photo by EPA/BGNES

Protests continue in Tripoli, but the eastern Libyan city of Benghazi and the third largest city Misurata are now firmly in opposition control.

The BBC's Jon Leyne is in Benghazi, where he says people are "nervous" but happy to have escaped the control of Col Gaddafi.

The city is being run by a committee of judges and lawyers and locals are being urged to return to work.

A French doctor in Benghazi, Gerrard Buffet, told the BBC that as many as 2,000 people might have died in the east alone.

Tripoli residents told BBC the city is under siege, people are very scared and panic is spreading by phone.

Opposition supporters in Tripoli have said they are planning to protest in Green Square after Friday prayers at noon (1000 GMT).

Reports from the capital say that the bodies of people killed there have been cleared off the streets. Witnesses said pro-Gaddafi militiamen - including foreign mercenaries - were patrolling the Tripoli's main streets, firing in the air.

Security had also been stepped up outside key government buildings, and homes and hospitals had been raided in search of opposition supporters, they added.

On Thursday, fierce fighting was reported in nearby towns, as pro-Gaddafi forces tried to regain control of areas seized by the opposition.

A witness in Zawiya, 50km (30 miles) to the west, said an army unit had attacked protesters with machine guns and rocket-propelled grenades.

Ships and military aircraft have been sent to evacuate thousands of foreign nationals trying to flee the turmoil.