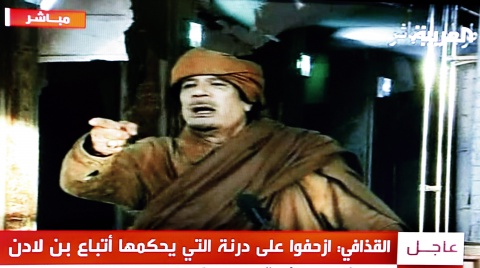 Libyan strongman ruler Col Muammar Gaddafi is battling to retain control of Tripoli and areas in western Libya as protesters consolidated gains in the east and foreigners continued to flee.

Much of the capital is deserted as pro-Gaddafi gunmen roam the streets, with reports of uprisings in western towns such as Misurata, Sabratha and Zawiya.

Eyewitnesses in Tripoli say the city is virtually closed, with many people hoping protesters and defecting soldiers would arrive from the east to help them.

Masses of protesters have been celebrating success in eastern towns.

Troops are said to have been sent to Sabratha after demonstrators burned government buildings, according to the Quryna news website.

The pre-Gaddafi Libyan flag was also reportedly raised in Zawiya, 50km (30 miles) west of Tripoli while other unconfirmed reports said protesters had seized control of Misurata, 200km east of Tripoli, after days of fighting.

Thousands of foreigners continue to leave, with chaos at Tripoli airport.

At least 300 people have died in the country's uprising.

Libyan leader Muammar Gaddafi has refused to step down amid widespread anti-government protests which he said had tarnished the image of the country.

In his first major speech on February 22 since unrest began last week, Gaddafi said the whole world looked up to Libya and that protests were "serving the devil".

US President Barack Obama broke his silence on Wednesday and called the suffering of the people in Libya "outrageous" and said the government there must be held accountable for its failures to meet its responsibilities.