China Thanks Bulgaria for Evacuating Its Citizens from Libya 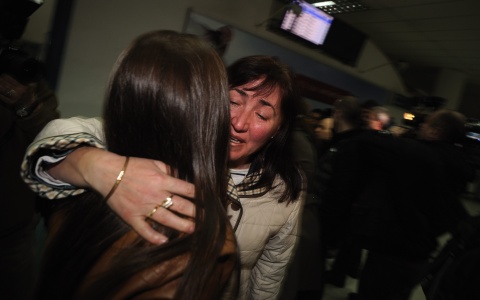 A total of 110 Bulgarians, 6 Romanians, and 10 Chinese were brought from Libya to Sofia on Wednesday through the evacuation efforts of the Bulgarian government. Photo by BGNES

China's Embassy in Sofia has issued a declaration of gratitude to Bulgaria for the evacuation of 10 Chinese citizens working in Libya.

The ten Chinese citizens were brought to Sofia on the Bulgarian government Airbus on Wednesday, China's Ambassador in Sofia Guo Yezhou said in his declaration. After that they continued on their way to China via Moscow.

Ambassador Guo has attributed Bulgaria's evacuation aid "based on the international humanitarian principles and the deep traditional friendship" between Bulgaria and China.

"These actions show one more time the good political relations between the two countries and the deep feelings of friendship between our two peoples. On this occasion, I would like to declare most sincere gratitude on behalf of the Chinese government and the Chinese people to the Bulgarian government and the Bulgarian people. I am convinced that the traditional friendship between our countries will continue to produce even greater results," Ambassador Guo stated in his declaration thanking the Bulgarian Foreign Ministry and the other relevant Bulgarian institutions.