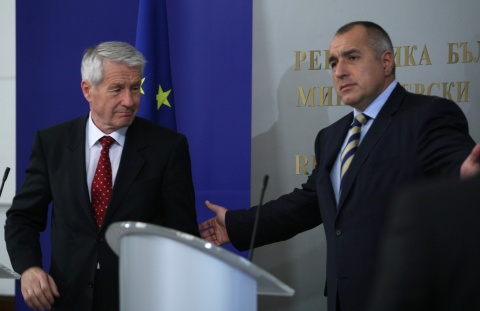 The Council of Europe will stand behind Bulgaria on its way to entering Schengen, Thorbjorn Jagland, Secretary General of the council, declared Wednesday.

"We are able to help the countries willing to join the Schengen Agreement. We are like a waiting room for those who want to enter EU and Schengen," he said, pointing out the key role the Council of Europe had for Bulgaria joining the EU in 2007.

Jagland is on an official visit to Bulgaria, where he met with the country's Prime Minister Boyko Borisov. Borisov said Bulgaria is flattered by the Secretary General's support.

Bulgaria and Romania were hopeful to enter EU's border-free zone in March this year, claiming that all requirements for it had been met.

Accession in March, however, has been practically blocked because of the vehement opposition of key EU member states, most notably France and Germany, which left Sofia and Bucharest hoping to be admitted into Schengen in October.

According to the last report of the Working Party for Schengen Matters, Bulgaria has covered the Schengen Accession criteria as far as the implementation of the Information System and the Supplementary Information Request at the National Entry ( SIS/SIRENE is concerned, but it has to put additional efforts into dealing with its Turkish border.