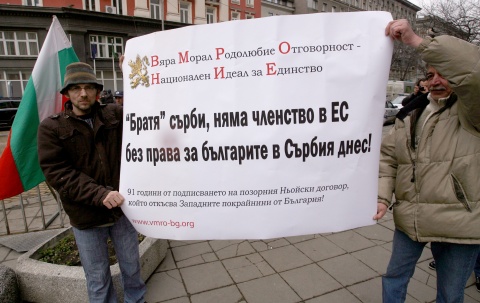 "Serbian "Brothers", There Will Be No EU Membership without Rights for the Bulgarians in Serbia Today," reads this banner of protesting Bulgarians outraged by Serbia's obstruction of the remembrance of Bulgarian national hero Levski in Bosilegrad. Photo b

Several hundred people, including members of the Bulgarian minority in Serbia, protested in Sofia Monday against the visit of Serbian PM after the Serbian authorities obstructed the remembrance of Bulgarian national hero Vasil Levski over the weekend.

Serbia's obstruction of the remembrance of Levski by the ethnic Bulgarian minority in the country led to strong reactions not just by the "nationalists on duty" but also by the mainstream Bulgarian press and the general public.

Ethnic Bulgarians from Bosilegrad as well as members of otherwise antagonistic nationalist formations in Bulgaria such as Ataka and the opposing factions of VMRO – VMRO-BND and VMRO-NIE - came together Monday afternoon protesting against the visit of Cvetcovic before the Council of Ministers where the Serbian PM was being received by Borisov. They demanded an outright apology from Serbia for the actions of its authorities.

The banners of the protesters read slogans such as "This Serbia – Never in the EU!", "No to the Serbian Terror", "Your brotherly Serbia unconditionally banned us from honoring Vasil Levski at his monument in Bosilegrad", "Are you MPs or are you trash?", "The Western Outlands (i.e. the Bulgarian-populated regions of Serbia – editor's note) have nothing to do with Serbia", "We are sick and tired of Serbia's chauvinism and Bulgaria's nihilism".

The VMRO-BND party raised demands for reviewing the legal status of the so called "Western Outlands" - the Bulgarian-populated border regions of Serbia, which Bulgaria was forced to cedeto Yugoslavia under the Treaty of Neuilly of 1919, the Bulgarian version of the Treaty of Versailles, after World War I.

The VMRO-BND party insisted that the "Western Outlands" should gradually be reincorporated into Bulgaria as the Treaty of Neuilly should have been revised a long time ago. Below: a map of Bulgaria after the loss of World War I.