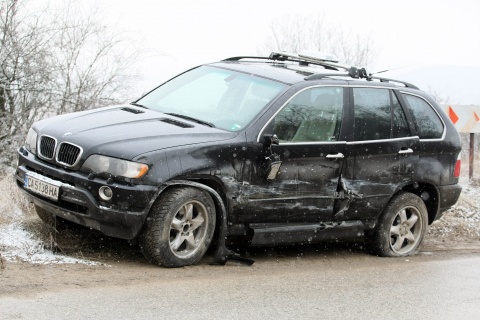 The government-issued BMW X5 from the procession of PM Borisov sustained damage after hitting another car. Photo by BGNES

An automobile from the procession of Bulgaria's Prime Minister, Boyko Borisov, got involved in a traffic accident Tuesday on its way from Sofia to the western town of Godech.

Borisov and other officials were traveling there for the official opening of a new factory.

The government-issued BMW X5 hit another car – a Volkswagen Passat with three men inside. There are no injuries, but both vehicles have sustained damage.

Another car from the official possession was also damaged after a fender-bender with the Volkswagen which spun around from the impact.

The Volkwagen driver, Daniel Vladislavov, insists the BMW traveled at high speed in his lane and he couldn't do anything to prevent the crash.

The Head of the National Security Services, (NSO), Dimitar Dimitrov, told the media the accident was caused by the Volkswagen, which was traveling at high speed on a slippery road, and the driver lost control.

The PM's procession stopped to inspect the damage.

Both drivers have been tested for alcohol and the blood probe came out negative.

This is the second accident in less than a month involving Borisov's procession – at the end of January a government vehicle hit a car when traveling to the northern city of Pleven. The crash did not cause injuries or substantial damage. The probe revealed it the accident was caused by an illegal passing of the NSO cars.