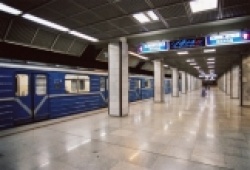 An aluminum briefcase caused an evacuation of all passengers at the Lyulin metro stage early on Tuesday in Sofia, Bulgaria.

The briefcase was found around 7:00 am on Tuesday. Special units from the Interior Ministry arrived on spot.

The metro was halted for some 15 minutes, until the object was being examined. It turned out the briefcase was empty, the bTV private channel informed, and the metro is back and running again.