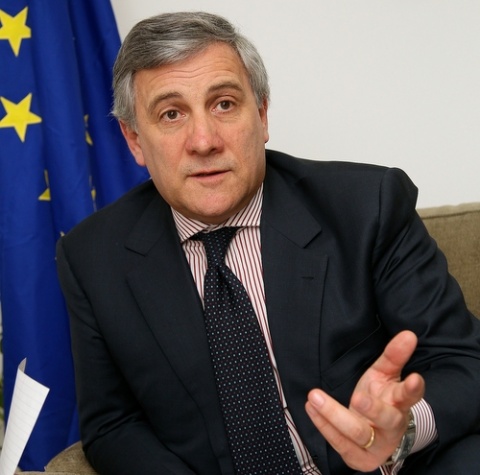 Interview of Novinite.com (Sofia News Agency) with EU Commissioner for Industry and Entrepreneurship Antonio Tajani. Tajani was in Sofia on Friday, February 11, 2011, for an international conference on the development and promotion of electric cars. Tajani has recognized Bulgaria's contribution for the creation of common mobile chargers - an idea that originated with Bulgaria's Solomon Passy, a former Foreign Minister, and his wife Gergana Passy, a former EU Affairs Minister, and became a reality in February 2011 as the European Commission presented their prototype.

Bulgarian Economy Minister Traikov and Prime Minister Boyko Borisov have made it clear that Bulgaria hopes to become a "major player" in the development and production of electric cars since they are a new and innovative product. Where you do you see Bulgaria's potential in that respect? Are there grounds to believe Bulgaria can become one of EU's hubs for electric vehicles?

Bulgaria is certainly one of the major players who have committed serious efforts to electric cars and electric mobility. This is proven not just by the conference on electric vehicles held in Sofia on February 10-11, and other similar forums, but also during the meetings of the EU Ministers for competitiveness in the EU Council of Ministers. Bulgaria has always declared this commitment on its part.

What are the specific measures that the European Commission plans to implement in order to encourage the development and use of electric vehicles?

We support all novelties that would contribute to reducing the greenhouse gas emissions. In this regard, I have already authorized the European Committee for Electrotechnical Standardization to create a common prototype for a socket and plug for electric cars.

Imagine the following scenario – a Bulgarian tourist goes by their electric car on a vacation in Greece but cannot charge it there and has to come back by train or by bus. This is unthinkable. We need a unified, common standard for the charging of these electric cars.

We have already allocated EUR 23 M for the creation of a common format of electric charging points (EV charging stations). Together with EU Commissioner for Energy Gunther Oettinger, who is the person in charge of this file, we are working the so called Innovation Partnership by coordinating all measures to encourage the so called green or environment-friendly cars.

I am glad that you mentioned the need for standardization and common, unified sockets and plugs because I would like to direct your attention to an EU-wide project that started as a Bulgarian idea and initiative – the adoption of common unified chargers for mobile phones. I would like to present to you this collage of the Bulgarian "24 Chasa" daily showing the authors of the idea – former Bulgarian Foreign Minister Solomon Passy and his wife Gergana Passy, former Bulgarian Minister for EU Affairs, as a statue of ancient mythology gods holding the prototype common mobile phone charger. Why is it that the European Commission leaves largely unnoticed the contribution of Bulgaria, an EU newcomer, to the invention of the idea for the common chargers?

I don't think you are right since the European Commission presented several days ago in a spectacular way this Bulgarian initiative for the common chargers for mobile phones. All newspapers around the world wrote about it.

The European Commission really took to its heart this Bulgaria initiative. 14 large companies producing mobile phones have already committed to it, and we issued a call urging the rest of the world to follow the EU. We are also now going further as we are advocating unified standards for chargers for computers, digital cameras and other devices that need such chargers.

So we have always recognized and pointed out Bulgaria's efforts and contribution to this project – just as I did during the conference on electric vehicles here in Sofia. The very fact that there were four European Commissioners in Bulgaria on the same day (Friday, February 11) demonstrates how much the EC has taken to heart Bulgaria's cause.

We recently released a promotional video in YouTube called "One Charger for All" designed to promote the idea and thus to give credit to Bulgaria. A very pleasant video clip.

You have mentioned you believe the EU needs to establish a new body with powers to recommend blocking foreign takeovers of strategically important European businesses modeled on the Committee on Foreign Investment in the United States. Why do you think such a body is needed and what constitutes a strategically important European business? What exactly drives such concerns – is it specifically the acquisitions of European companies by Chinese and maybe Russian private and state companies?

I am very much in favor of investments coming from and originating from outside the EU, and I am really opposed to protectionism. Non-EU investments are welcome when they help factories and industries develop and grow.

My idea was just to open a debate on whether it is not a good idea to inspect these investments in some way.

My concern stems from the fact that many investments are not done with a commercial goal. If they are done to achieve commercial goals, then everything is OK. But they are used as a trick to grab hold of know-how that can then be taken away from the EU, and thus lead to the loss of jobs.

Many EU member states already have rules in that respect. Not to mention that the USA already has such a body that inspects all non-American investments.

Some very renowned publications – the French paper Le Monde and the Italian Il Sole 24 Ore – published an article about six EU governments – of Poland, France, Germany, Italy, Spain, and Portugal – who expressed concerns similar to mine. With EU Commissioner Barnie we have drafted a joint letter handed to EC President Barroso asking for a debate on this topic. This, of course, is my personal position.