SEEMO/IPI Alarmed over Attacks on Media in Bulgaria 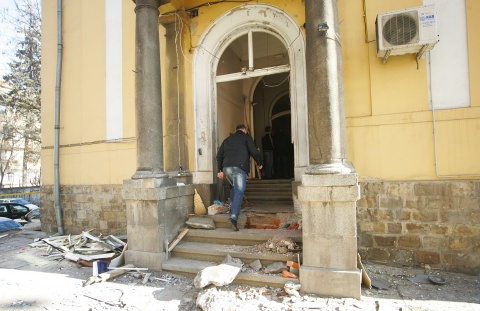 The bomb planted in front of the office of the Galeria weekly last week caused material damage. Photo by BGNES

In a joint statement of SEEMO and IPI, the two international NGOs express alarm over the bomb, which exploded on February 10, 2011, around 5:40 a.m. in front of the headquarters shared by the weekly publication and the Millennium publishing house in the central part of Sofia.

SEEMO says that Galeria is known for reports that have criticized the Bulgarian government, and the publication has reported on wiretaps dealing with alleged corruption among high-ranking officials. These include last month's publication of transcripts of taped phone conversations between senior government officials and the chief of the country's Customs Office about alleged pressure on officials to protect certain companies from tax investigations.

This is not the first attack on a media company in Bulgaria since the country joined the European Union. Assailants attacked the Varna office of Bulgarian TV SKAT on 3 February 2010 with a Molotov cocktail, and the head office of TV SKAT in Burgas was the target of a similar attack just one day earlier.

"SEEMO asks Bulgarian officials to conduct a professional investigation. It is important to obtain details about the circumstances behind this attack. We expect the Bulgarian authorities to investigate the matter fully and bring those responsible to justice. This means not only finding the persons who actually planted the bomb, but also those who organized the incident. SEEMO has registered many attacks and threats against investigative journalists and their family members in Bulgaria in recent years. It is particularly unfortunate that such incidents are still occurring despite the fact that Bulgaria is a member of the European Union. Bulgarian authorities must do everything in their power to provide safe working conditions for journalists," declared SEEMO Secretary General Oliver Vujovic.

The blast that occurred before the office of the Galeria weekly did not hurt any people but caused damages. The Galeria weekly is a controversial newspaper believed to the be mouthpiece of Aleksei Petrov, a former secret agent of the Bulgarian State National Security Agency DANS, who in February 2010 was arrested in a much advertised special police operation "Octopus" but the organized crime charges against him have been downsized ever since.

In January 2011, the Galeria weekly caused "Tapegate", a scandal that shook the country, by releasing tapped conversations of senior Bulgarian government officials providing discrediting information regarding the Borisov government. The tapes are believed to have been sneaked out of DANS or the Interior Ministry but their authenticity remains disputed.

The explosion led the Editor-in-Chief of Galeria, Kristina Patrashkova, to declare that the bomb is intended to intimidate the paper. At the same time, however, Bulgarian PM Borisov himself as well as some other politicians have hinted that the bomb might have been planted deliberately, as PR trick, to present the newspaper as a victim and to generate sympathies from the public.