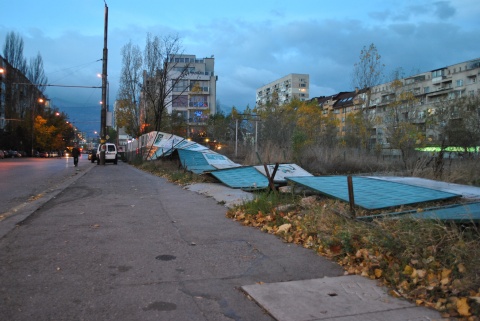 Most of Bulgaria expects hurricane-like winds on Saturday and Sunday. Photo by BGNES

The Bulgarian authorities have declared a Code "Yellow" alert all across the northern and southeastern parts of the country over hurricane-like winds.

The National Institute of Meteorology and Hydrology of the Bulgarian Academy of Sciences announced that Code "Yellow", the third highest level of alert, is for the districts of Vidin, Montana, Vratsa, Pleven, Lovech, Plovdiv, Gabrovo, Veliko Tarnovo, Ruse, Razgrad, Targovishte, Shumen, Silistra, Dobrich, Varna, and Burgas – or 16 out of the 27 Bulgarian oblasts (i.e. administrative districts).

The Danube city of Ruse saw the strongest winds in Bulgaria on Saturday as the gusts there reached a speed of 40 meters per second.

The strong winds are expected to subsidy gradually on Sunday even though Eastern Bulgaria will be the last part of the country to enjoy a lull.

As the wind speed reached 150 km/h late Saturday, the authorities issued a warning for all vessels on the Danube in the Ruse area.