Politicians Agree Blast Not against Galeria, but Bulgaria 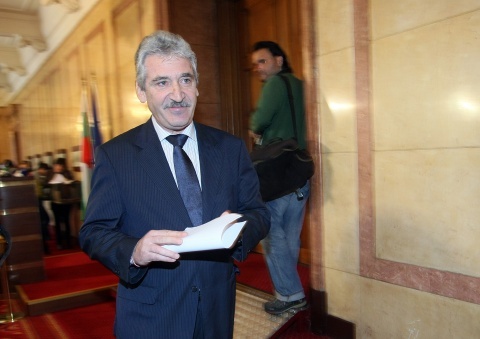 Krasimir Velchev, Chair of the GERB parliamentary group, has expressed opinion that the blast was not against the Galeria weekly, but rather against the state. Photo by BGNES

The blast at the office of controversial newspaper Galeria is an act against the state, according to the chair of Bulgaria's ruling party GERB, Krasimir Velchev, said.

"The explosion did not coincide by accident with the arrival of four EU Commissioners and the only thing that bothers me is that such an act would be very difficult to solve because it was conducted by professionals. It is not like someone got upset with the newspaper and put a bomb there," Velchev said.

In his words, the accident has been very well organized to coincide with the arrival of four EU Commissioners to Sofia Thursday and Friday.

"The blast was organized by people who have an interest to attack the government in its most vulnerable time," Kostov said.

In his words, when they arrive to Sofia, the EU Commissioners will think that the state does not fight organized crime.

"The newspaper that was attacked is the mouthpiece of Petrov. They cannot fool us. Who is giving them money to get published? It cannot be from sales," Kostov said.

The explosion occurred shortly after 5:30 am on Thursday in front of the office of controversial Bulgarian newspaper Galeria weekly on Tsarigradsko Shose Blvd.

There are no injured people but damages to the building and to nearby buildings were reported.

According to the Editor-in-Chief of Galeria, the blast was a political and not criminal act, which aimed to intimidate the newspaper.

In January, Galeria weekly and the marginal conservative party RZS ("Order, Law, Justice"), both of which are deemed to be connected with Alexei Petrov, a former undercover agent arrested in a special police operation in February 2010, dubbed "the Octopus" and "the Tractor".