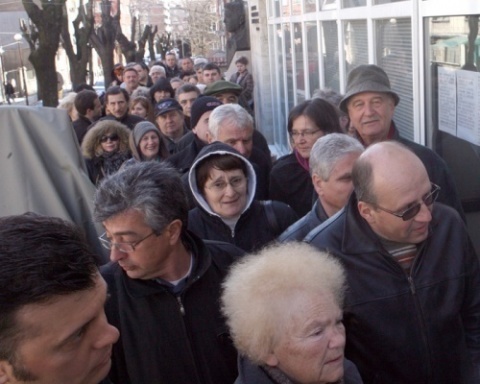 Bulgaria's interior ministry has warned about possible huge queues in front of passport offices after September 2011. Photo by BGNES

Nearly 60,000 Bulgarians will be fined over expired identity documents, according to Maria Kostadinova, Head of Identity Documents Directorate of the Interior Ministry.

She said Wednesday that the ministry issued about 15,000 act for people who have not renewed their expired identity documents. The fine is between BGN 20 and BGN 150.

Kostadinova pointed out that the fines would affect only people whose documents have expired by the end of August 2010.

The interior ministry has urged people to renew their documents by the middle of the year. It also announced that there will be no 6-month gratis period for documents who expired after December 31, 2010.

The gratis period was implemented for documents, which expired in 2010, because of the problems with the system for issuing new biometric identity documents.

After September 2011, about 200,000 identity documents will expire per month, which would once again lead to huge queues in front of the passport services, the interior ministry warns.