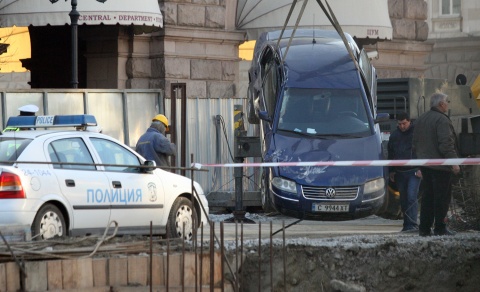 The driver of a Volkswagen Passat, which fell in the excavation at the Sofia metro construction site, has not been injured. Photo by BGNES

A Volkswagen Passat automobile stirred excitement in downtown Sofia Wednesday morning after falling in the excavations for the construction of the capital's subway.

The incident happened at the parking lot in front of the shopping mall known as the Central Department Store (TSUM), located right near the metro construction site.

Onlookers say, most likely, the car fell because it has not been parked well, but there is still no official information from the police.

A crane was used to pull the Volkswagen from the ditch.

The driver had not suffered injuries.